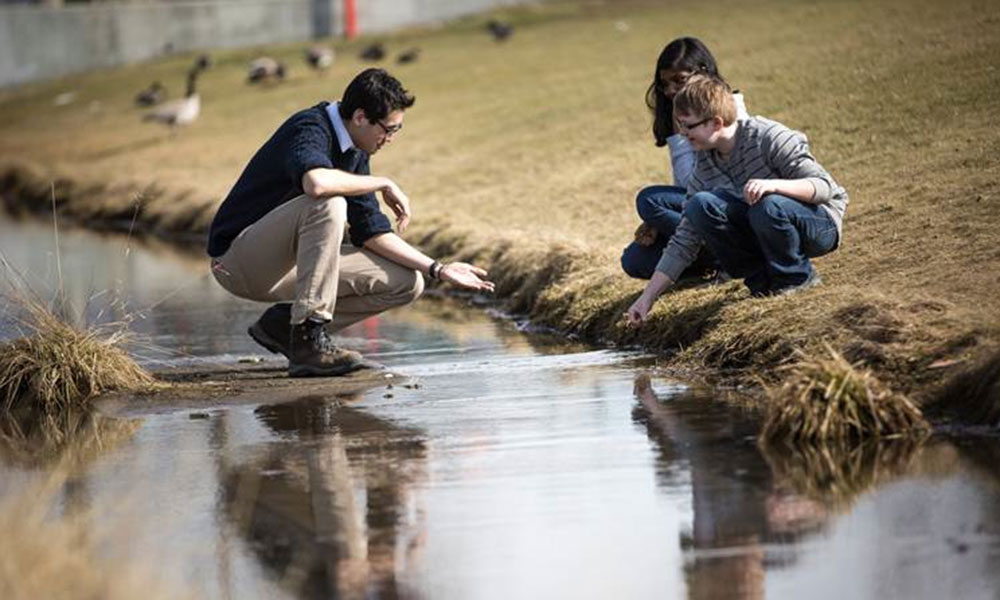 “There was a huge transformation. Right away the kids were more receptive. Their creative senses were alive. They spoke with passion and learned quickly.”

NATURE ITSELF is the best educational tool, according to Shimshon Obadia, a third-year Interdisciplinary Performance major at UBC’s Okanagan campus.

“Nature is the first educational technology. But there seems to be this divide between what is scientific and what is creative — even though you need a lot of creativity to explore science and a lot of science to fuel creativity.

“These things need to merge. The best place to merge them is in nature, and the best place for them to thrive and inspire is within children.”

Obadia has seen the results firsthand as a BFA student and researcher in the Faculty of Creative and Critical Studies (FCCS).

Obadia is halfway through a two-year re-naturalization project, working with Grade 7 and 8 classes at École KLO Middle School in Kelowna, B.C., to restore a damaged wetland and lost habitat of the Western Painted turtle. Plans for Fascieux Creek, which runs through school property, includes planting native trees and plants along the waterway.

In 2008, KLO students found turtle eggs in the school’s long-jump sandpits, near the creek bed covered by old, aging concrete pads. Under the direction of science teacher Michelle Hamilton, the students worked hard to restore the turtle habitat on school property — despite the challenge of raising $100,000 to get the job done.

In 2013, Obadia was recruited to engage the habitat re-naturalization project through creative solutions, using eco art to help raise awareness and funds, which culminated with the public gallery exhibit “Concrete in the Creek.”

With Obadia’s assistance, the students came within reach of their goal, roughly estimated at $100,000 by the City of Kelowna. By the time that goal became a near reality, however, the actual price tag had changed to $500,000 — heartbreaking news for both Obadia and seven generations of middle schoolers.

“After a bit of soul searching,” Obadia says, “I knew I wasn’t going anywhere, and that I needed to stay involved. The kids had worked too hard and learned so much. I wasn’t going to lead them in defeat.”

Obadia continued on with the project and was hired as a research assistant with the Eco Art Incubator, an initiative directed by FCCS professors Nancy Holmes and Denise Kenney. The Incubator supported Obadia’s project work with the school and enabled the pursuit of more extensive research in the area of integrating art, nature, and science into interdisciplinary school projects.

“Shimshon has incredible initiative,” says Denise Kenney, assistant professor in Interdisciplinary Performance. “The enthusiasm and commitment to the students at KLO has created multiple opportunities in which Shimshon can continue this work.

“Performance practice benefits embodied knowledge and embodied place-based experience, all of which is very important if science and environmental issues are to be addressed in a meaningful and resonant way.

“I think Shimshon’s work really speaks to what the arts have to offer to the community and to education.”

“While working with the students on the turtle restoration project I had a revelation,” Obadia says. “When the kids were creatively engaged in their natural environment, there was a huge inner transformation. Right away they were more receptive. Their creative senses were alive. They spoke with passion. They learned quickly.”

Obadia says this change was particularly noticeable in the “rowdy” kids. As soon as their hands were outside in the dirt with the perennial herbs they had planted themselves, “I saw some of the very best students with the greatest desires to learn I have ever encountered. The label on ‘problem students’ turned out to be a misconception.”

Obadia learned so much more.

“I realized that what I had been doing was actually much larger than saving a small piece of habitat — it was actually transforming children in a very positive way. I wanted to explore that further.”

“From the school, I learned that even in an institution with clearly set ‘concrete’ limits, every community always has the desire to grow. From the kids, I learned that the heirs to this Earth not only care about the kingdom they will one day be responsible for, but they’re eager to take direct action for it the moment they can grasp the means to make their passions become reality. And from Michelle, I’ve learned that even in the face of apparent defeat, persistence and passion are never too much to ask for.”

While Obadia was getting research into the larger sphere through a number of channels, including a documentary by the Eco Art Incubator, the turtle habitat component faced another challenge. Hamilton, Obadia’s colleague and teaching partner at the school, was recently in a car accident and had to take a leave from work to recover.

“Michelle is the backbone of the turtle habitat re-naturalization project, and we worried the entire project and everything she worked on for the past seven years could fall apart. Right away, I offered to step up. We couldn’t lose momentum.”

Obadia stepped in to teach the Eco Leadership class and assist in Environmental Education classes, and is now setting up a self-sustaining, creative learning outdoor art space for the École KLO Middle School community at the Fascieux Creek Wetland Park. The inner-city haven for ducks and other wildlife is located about 500 metres downstream from the school.

“We’re letting students decide artistically and creatively how to use the land and space around them, while teaching them their science curriculum and lessons about creativity.”

As for what happened to those turtle eggs found by the École KLO Middle School students seven years ago: they hatched.

Every year now, Obadia and the students set baby turtles free in the Fascieux Creek Wetland Park, where, in the little urban green space, the hatchlings are given a better chance of having a better life.

All of Obadia’s and the École KLO Middle School students’ efforts paid off, after five years of dedicated work, the turtles now have a protected habitat. Working with FCCS professor Denise Kenney, Obadia created a documentary focusing on the tireless efforts of the students working to restore the turtle’s natural environment. Obadia was also published in Comparative Media Arts journal about this project.

Since graduating with a BFA in 2015, Obadia has been busy in the Okanagan Valley as an art educator at the Rotary Centre for the Arts, The Vernon Community School, and most recently as the Education and Programming Assistant at the Kelowna Museums.

“I am able to use many of the things learned in school — combining art, research and teaching into one and to use that in a meaningful way,” Obadia says. “The connections I made while in school at UBCO have been invaluable.”

After starting at the Kelowna Museum, Obadia put together an educational program to go along with the Social Life of Water project. Working closely with all of the teams involved with the project, a program was developed for a touring exhibition.

In 2017 and 2018, Obadia continued to work with Nancy Holmes, connecting with the Eco Art Incubator and Border Free Bees to create pollinator-related programs for the Kelowna Museums.

CONCRETE IN THE CREEK

In 2011 and 2012, École KLO Middle School won the Kelowna Mayor’s Environmental Achievement Awards for “Most Environmentally Friendly School” for initiatives such as its Eco Club, Green Parent Committee, recycling program, school garden, and membership in the Adopt-a-Stream program.

The students’ tireless efforts were showcased in a 2013 eco-art exhibition at Kelowna’s Alternator Centre for Contemporary Art.

The collaborative work with FCCS student Shimshon Obadia, titled “Concrete in the Creek,” featured school desks atop a large watercolour painting created by the students using imagery of Fascieux Creek as they envision it being one day soon. 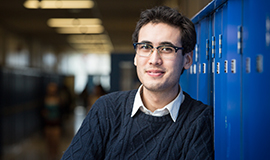 Each desk had a chalkboard slate and chalk so audience members could contribute their ideas and opinions on the project. There was a live feed that projected the images from the slates onto one wall in the gallery.

Donations were accepted to help support the students’ cause to restore the creek to a thriving natural habitat and educational resource. Ongoing fundraising initiatives of the KLO Eco Club include the making and selling of wooden turtles, which now decorate the school’s sandpit fences and bear the names of each donor.

Obadia originally chose UBC in the Okanagan because of the smaller campus size and natural surroundings. Now, however, Obadia says UBC Okanagan couldn’t have been a better academic fit.

“Coming out of an arts-based high school in Toronto, all my friends were applying to theatre schools,” he says. “There was no appeal for me, it wasn’t interesting. But I still loved performance, I still loved creating.”

Obadia stumbled across the FCCS interdisciplinary performance program and was taken by its unique approach: “I was not bound by a specific style but was given the creative freedom, faculty support, research opportunities, and technical skills I needed to take me to a good place. And for me, it’s all about place.”

Obadia is continuing with research in the area of science, nature, and art. A recent recipient of a UBC Undergrad Research Award for a new project, Daylighting the Classroom: Eco Art Putting Education Back in Nature’s Hands, Obadia hopes this research will provide an innovative framework for school districts and educators that demonstrates how science, art, and nature can be used to teach children.

Concrete in the Creek was co-sponsored by UBCO’s Theatre26, the Centre for Culture and Technology, the Eco Art Incubator, and the Alternator Centre for Contemporary Art located in the Rotary Centre for the Arts, 421 Cawston Ave., downtown Kelowna.