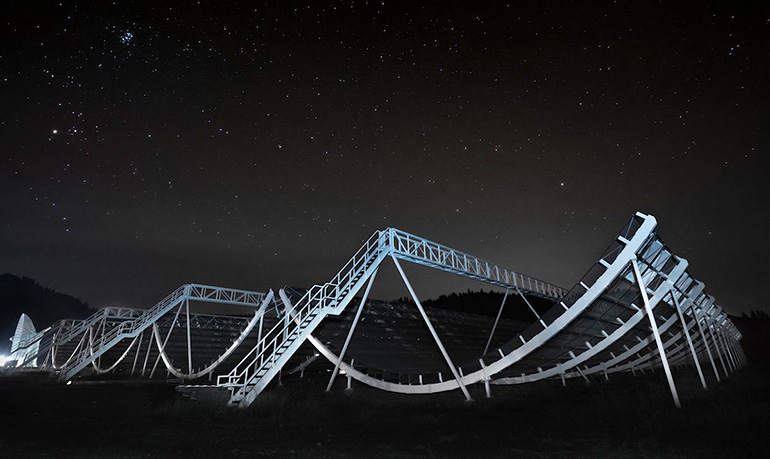 The Okanagan-based CHIME radio telescope detected a fast radio burst from within the Milky Way in April 2020.

In the decade since they were first discovered, astronomers have categorized fast radio bursts (FRBs) as mysterious phenomena. But a recent astronomical event has provided further insight into the origin of these signals.

In a paper published recently in Nature, researchers confirm the evidence that supports their theory of what caused the April 28, 2020 event—a magnetar.

Magnetars, or high-magnetized pulsars, are remnants of dead stars that have gone supernova and left behind a compressed core that has more mass than the sun but is the diameter of a small city. Before this, researchers suspected that FRBs likely originate from magnetars, but no FRB-like event had been seen from any of the Milky Way’s roughly 30 known magnetars.

Alex Hill is an assistant professor of astrophysics in the Irving K. Barber Faculty of Science and a member of the Canadian Hydrogen Intensity Mapping Experiment (CHIME) research team that made this discovery.

What is the CHIME project?

CHIME is a large radio telescope that was originally created to study the properties of dark energy. It was built in 2017 at the National Research Council’s Dominion Radio Astrophysical Observatory (DRAO) just outside of Penticton, BC.

Dark energy is a mysterious form of energy that’s causing the universe’s expansion to speed up over time. It’s challenging to study because we can’t see it—we can only see what it does to things we can see, like galaxies. Researchers from UBC, the University of Toronto and McGill University came together in partnership with DRAO to build CHIME in order to try and map out the properties of dark energy by observing hydrogen, the most abundant element in the universe.

My main focus within CHIME is using this telescope to study our own galaxy, the Milky Way, which we must look through to see the distant universe. This is a great challenge for cosmological science but a great opportunity for us to understand where the 'star stuff' we’re all made of comes from.

What makes the CHIME radio telescope different from others?

With a distinct cylindrical design, CHIME is definitely not what comes to mind when most people think of a telescope. It looks like four massive half-pipes laying next to each other, and it’s now the fourth-largest radio telescope in the world. This allows us to see a strip across the whole sky from the southern to northern horizons all at once. CHIME itself doesn’t move. Instead, when the earth rotates, we let the sky rotate over, so we’re seeing the sky in its entirety every day.

This is highly valuable because it lets our team build up many signals so we can detect very faint things. It also lets us see signals that go off periodically, like FRBs. When an FRB goes off, you don’t know in advance where it is, so you need to be seeing as much sky as possible at a given time to see most of them. CHIME is specifically designed to do this.

CHIME detected a signal from within the Milky Way that appeared similar to FRBs. The team immediately released what’s called an astronomer’s telegram to let our fellow astronomers know something strange just happened and they should point their telescopes at it right away. FRBs are exactly what they sound like: mysterious bursts of radio emissions that go off quickly. Because they go off so quickly and usually leave no signal behind, you have to catch them the moment they appear.

We suspected that they might be coming from magnetars because they’re compact and have strong magnetic fields that produce radio signals. But there just wasn’t enough evidence to say one way or another.

The first FRB was detected in 2007, and there were around 30 to 50 of them detected before we built CHIME. Since then, CHIME has detected hundreds, but none in the Milky Way until 2020. This had us scratching our heads—if FRBs come from magnetars, as we had suspected, and we know our galaxy has magnetars, it was a bit of a puzzle that they’d never happened here.

The April 28 event was really affirming for our team. It was a pretty exciting day for astronomers because it was a first, and we finally had this new, concrete evidence that we were on the right track.

In our line of work, we’re trying to detect radio signals. And to do so effectively we need a site that is as radio quiet as possible. Cell phones, TV towers and any other electronic device that produces radio frequency interference can threaten our success.

Our site is one of the best in the world for what we do. It’s ideal because, through a combination of regulation and geography, it is well-protected from radio signals. We’re one valley over from Penticton, so the mountains block radio signals from the city. At the observatory, we don’t use microwaves to heat our lunch, all of our computers are kept in metal cages that keep radio signals in, and we can’t use cell phones even in airplane mode. The observatory staff test every piece of electronics on-site to make sure they don’t harm our radio-quiet environment.

It may sound extreme but we’ve worked incredibly hard to keep our site radio quiet—it’s an enormous benefit to science. I don’t think there’s an observatory in the world with a better combination of an outstanding radio-quiet environment and easy access to a major population centre.