Art in the Streets 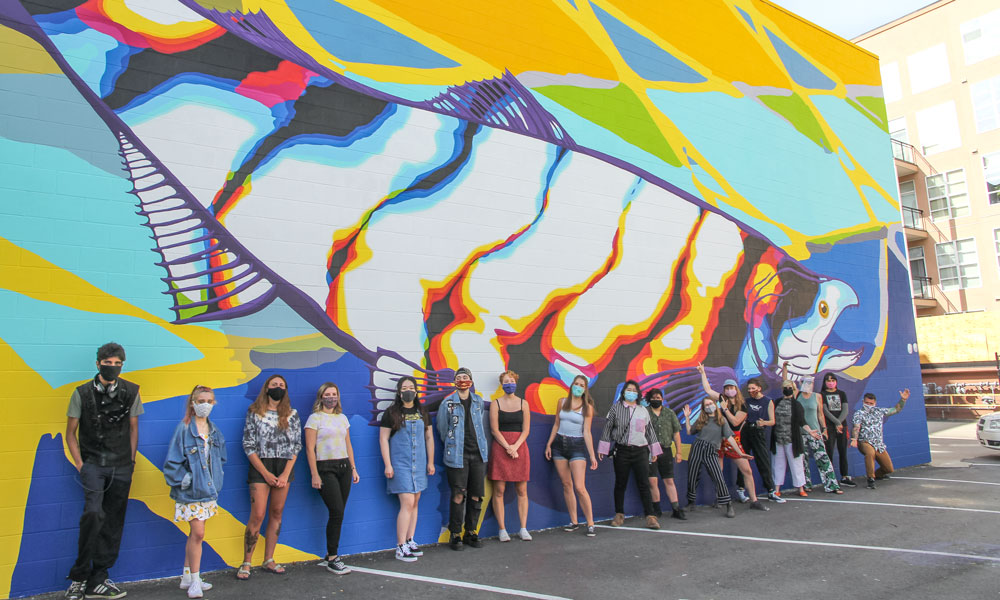 WHEN IT COMES TO FINE ARTS, it’s not as instinctive to think about “fieldwork.” But for a number of UBC Okanagan Bachelor of Fine Arts (BFA) students, the empty building faces of downtown Kelowna are fast becoming a welcoming canvas outside of the classroom.

As part of the BFA program, instructors David Doody and his partner Jorden Doody supervised the creation of two downtown murals, both located on St. Paul Street. Together, the Doodys worked to help students apply their painting and drawing skills to a much larger canvas—something both David and Jorden have extensive experience with. As co-founders and co-directors of the Uptown Mural Project in Kelowna’s Rutland area, the seasoned mural artists have so far brought 19 murals to life while also emphasizing the importance of art in public spaces.

The Uptown Mural Project grew out of a desire to bring more art to public spaces. While living in Montreal, David and Jorden became involved in a festival called MURAL, which has now grown to become one of Canada’s most-attended cultural events.

“We were enthused by the scene and the energy with this group in Montreal. The outdoor public environment was exciting and new, so when we decided to move back to the Okanagan, we knew that we wanted to bring a piece of this back with us,” David says.

David says that public art efforts like murals and street art help publicize and democratize the arts by making them more accessible to everyone and transforming communities into dynamic open-air art galleries. These vibrant and bold contributions to neighbourhoods are often celebrated by locals and tourists alike, and are recognized as important sites for contemporary Canadian culture.

Likewise, the mural project provides a great deal of value to the UBCO BFA students. With David and Jorden’s supervision, students are guided through the steps of planning, pitching and painting a public mural.

The course—which was developed in the summer of 2019—gives students the experience of working with a diverse range of technologies including projectors and mechanical lifts, while also learning a variety of paint applications and techniques common to mural painting.

The steps to paint a mural may sound simple at first: design the image, prep the space, paint and then clean up. But as David points out, there’s far more that goes into the process. A single mural can be the result of more than 400 hours of work.

“Designing an image that will fit the space can take just as long as painting it on the wall,” David explains. “You need to understand how it will look from many different angles, and whether the components of the image fit the space. Then the wall needs to be prepped. Outdoor walls have a lot of dirt and other things stuck to them, so work has to be done to clean the wall and prime it before mapping out the space.”

From there, the image is projected onto the wall and traced, something David says isn’t as easy as it sounds. “Transferring an image you see on your computer to a 3,000 square foot wall has its challenges. Once you start, you can’t stop, since each time you set up the projector, it won’t be the same.”

Then the painting starts. The team blocks in the colours, essentially creating a large paint-by-numbers project that must be filled in by more than just a stroke of a hand—sometimes whole-body movements are required to reach a spot.

“Sometimes the painter’s arms simply aren’t long enough to make the mark needed, so we’ve had to invent tools to hold the brushes just so we can get the colour up,” David says. “Finally, there’s finishing and clean up. After being so close to the wall we all take a step back to make sure the image is cohesive. That can lead to more hours of work to fill in parts and tie it all together.”

While the technical skills and experience of working with different types of equipment are key advantages for students, there are also concealed benefits of the course. From finding sponsors and donations to obtaining permissions and gathering supplies, the mural project provides students with a variety of learning moments.

“Not only do the students learn so much about the process of creating public art, but the ability to work outside of the studio is another enriching experience that murals bring,” says David. “A mural doesn’t fit into the standard classroom setting. The project necessitates engagement far beyond what you can expect in regular four-hour classroom blocks.”

He adds that creating a painting in the public eye is exciting for students, who are usually in the studio working alone. The course allows them to learn how to work in a hands-on, large-scale team project.

“At the same time, they’re also helping to revitalize the urban landscape as they play a critical role in the resurgence of urban centres, adding a splash of colour onto aging architecture and breathing new life into their surrounding communities,” explains David.

Students must achieve milestones within the course by working on independent projects alongside the team mural. One such project involved researching existing murals to give context, conducting site research, image design, budgeting as well as planning the logistics of equipment, supplies and painting. Students were evaluated on their participation, effort and engagement with these projects as well as the mural painting.

When community members see students in public working on the mural, this also opens up so many future opportunities.

“We’ve had students working on other murals in the community at the Lake Country Art Gallery and at the Vernon Public Art Gallery—where they had to use all the skills they learned in class,” David notes.

The Uptown Mural Project not only employed two students to hold walking tours of the murals in Rutland, but is also currently working with five artists who previously participated in the mural course. With the future work the Doodys are also planning, they will also be able to give students opportunities to assist with those projects.

“This course provides students with the chance to apply and demonstrate their skills to a larger scale while pushing them to work alongside one another,” says Jorden. “Collaboration is a pivotal component in mural painting, and for students that lack opportunities to work collaboratively, the mural project was a great way for them to experience working together.”

“We’re starting to see a groundswell of support for community art,” adds David. Developers and building owners have approached him to ask about the mural painting process and to get involved in future projects.

“I think this course shows us how much impact and excitement a large painting like this can bring to a community.”