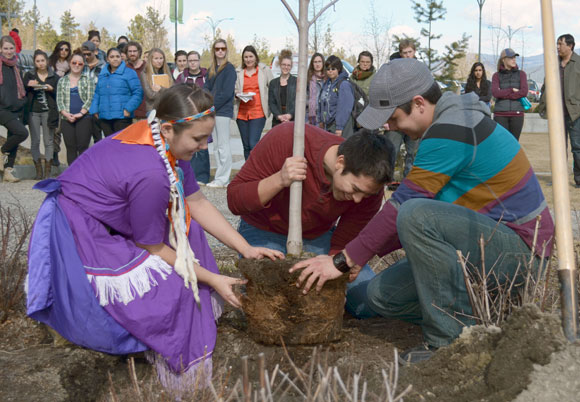 From left: UBC students Hailey Causton, Nicholas Clark and Spencer Belcourt tease the roots out on the maple tree next to the outdoor amphitheatre, just southeast of the EME building, before the tree is placed in the ground.

The last trio of Truth and Reconciliation Commission (TRC) events on campus this academic year tugged at the heartstrings of participants.

What started out with a National Event at the PNE grounds in Vancouver on Sept. 18, wrapped up with live streaming in the UNC Ballroom of the final TRC event in Edmonton on April 26 and 27. Students, staff and classes stopped by to hear moving testimonials from Residential School survivors.

Greg Younging, assistant director of research for the TRC process, recalls his experience listening to hundreds of testimonies from Residential School survivors.

“I’m the first generation in my family not to go to residential school,” recalls the UBC Indigenous Studies professor to more than 50 participants at a tree planting ceremony near the outdoor amphitheatre. “I realized for many of my students it has been the same. It made for an interesting dynamic in my classroom.”

“Hearing the testimonials affected me deeply. I needed to take a break from it for a year at one point.”

In planting the maple tree, which was purchased by the Indigenous Student Association, Younging pointed out the symbolism of the tree itself. “The roots are our ancestors. The trunk of the tree is the survivors who have passed on. The branches are our family members who are survivors, and we are the little buds.”

Students, staff and even entire classes showed up to watch live streaming of the Edmonton event and to hear reflections of the pain endured by Aboriginal people who were torn from their families and punished for speaking their language.

Many of the testimonials featured more horrific childhood recollections. Ethel Lamotbe was one of the survivors to testify. She recalls while being sexually abused, her mind would leave her body and go to the ceiling from where she would see exactly what was happening below. By disengaging what was physically happening to her person, she was able to temporarily get through the experience.

“It’s good to hear the stories and to see them reflected on the faces of non-Aboriginal students,” said UBC student Candice Loring, a Gitxsan Nation member. “It’s so important for all Canadians to understand how Residential Schools had an intergenerational effect on us.”

But those on campus did not have to rely on live streaming to hear Residential School accounts. In the showing of the documentary ‘Dancing Bear,’ Secwepemc (Shuswap) Nation Elder Ernie Philip shared some of his experiences at school which eventually led to serious thoughts of suicide.

“Our culture was not to spank our children. That was different for us. When I spoke my language, I used to get strapped and hit for it. I could not figure out why my back was all black and blue,” Philip told participants at the film screening in the University Theatre.

As an 8-year-old, Philip raised his hand and asked to use the washroom in Secwepemc. The teacher hit him in the face. It was his first day at Residential School. “Everything was backwards. I didn’t understand it.”

Another time, Philip was told he received 50 lashes. He did not remember the total as he lost count after the fifth lash. He found it ironic that the person handing out this particular punishment later had a street named after him in Prince George.

Residential Schools had the mandate of removing language and culture from Aboriginal students. By stripping children of their culture, in many cases Residential Schools took away their will to live. Years later, Philip was glad he did not to take his own life. But as a young man, he seriously considered it.

After being stripped of his First Nation identity, Philip admits to having hate in his heart. But as an Elder, he sees a bigger picture. “People who ran Residential Schools, I think they lost their identity too.” 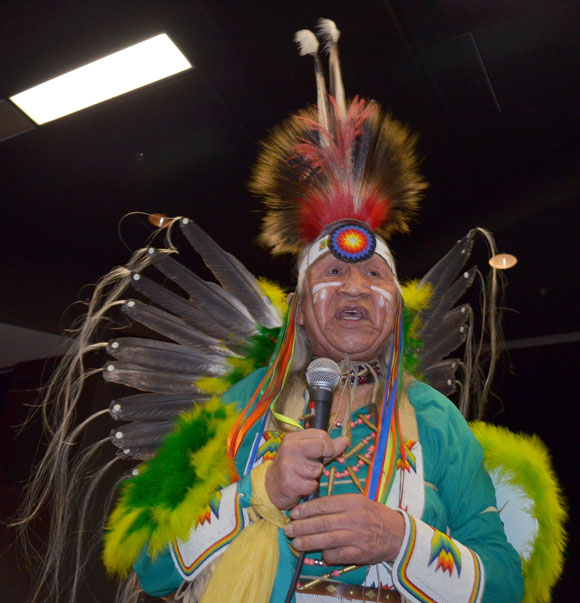 In the University Theatre, Secwepemc (Shuswap) Nation Elder Ernie Philip opened the screening of the documentary ‘Dancing Bear’ by speaking from the heart about his Residential School experience. 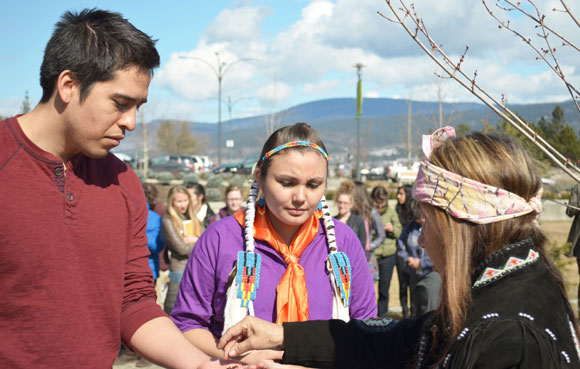 At the Tree Planting Ceremony on March 21, Westbank First Nation Elder Delphine Derickson passes out tobacco to Hailey Causton and fellow Okanagan Nation member Nicholas Clark to place in the ground underneath the tree.