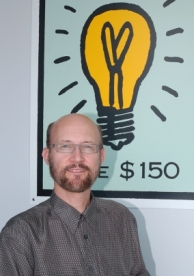 Programs of a different kind -- built on collaboration between professors, students and the various faculties -- are being developed at UBC Okanagan, says Dr. Bob Belton, Dean of the Faculty of Creative and Critical Studies.

Painting, sculpture and other fine arts may seem an unlikely match with health education, but that unusual combination is happening at UBC Okanagan.

It’s part of a vision shared by Joan Bottorff, Dean of Faculty of Health and Social Development, and Robert Belton, Dean of the Faculty of Creative and Critical Studies.

“Bob Belton and I have started working on connecting Fine Arts and Health. It’s very interdisciplinary and an emerging area of interest,” Bottorff said. “We’re talking about more than art therapy. There’s interest here in the possibilities of a graduate program, and also in building research programs.”

The university is actively assessing ways in which art and health programs can respond to — and benefit from — serving real needs in Okanagan communities.

Weaving health studies into other disciplines doesn’t stop with fine arts. Some are exploring the idea of creating an English course focusing on studying narratives of health and illness experiences, said Bottorff.

Collaboration between faculties is producing all kinds of academic fusion, said Belton, whose faculty is about to introduce new courses in theatre, music history and film – programs unlike those offered anywhere else.

Take the music history program, for example. “Eventually, we’ll offer music history courses where you just study music. There will be real collaborations with visual artists, creative writers, and cultural analysts of all sorts,” Belton said.

“Really, we’re looking for a different kind of paradigm, collaborating with human kinetics, for example, or developing something like digital opera. We’re trying to establish the initial conditions that will produce things we can’t predict. We’re doing something different, deliberately seeking new kinds of fusion.”

All it takes is an initial spark of interest or inspiration, and an idea spreads from one person to the next, from professor to student to professor, and so on, Belton observed. That’s how collaboration is working at UBC Okanagan which, according to its academic plan, was designed from the ground up to invite interdisciplinary study.

Another phrase introduced by the academic plan, “intimate learning community,” reflects the school’s small student population (3,500 students last year) and compact campus (academic buildings currently occupy only a fraction of its 105 hectares). But that small size can deliver big benefits to students and faculty, said Belton.

“The surrealists use the phrase ‘objective chance’ to describe fortuitous encounters,” said Belton. “We’re looking for the academic version of that. In a smaller place like this, you’ll see it. But when, in addition, you do things designed to make fortuitous encounters happen, you are even more likely to see that.”

Interdisciplinary interests even play a part in the selection of professors as new programs are founded.

“We are deliberately choosing people with one foot in another area. We want people who will light up other people – we want an art historian who can get non-art historians excited about them being here. We’re trying to build the best possible set of circumstances where we can do pretty much anything. Much to my amazement, it actually seems to be working,” Belton said.

“People are talking with each other. They are lighting each other up.”

Posted in Faculty of Health and Social Development