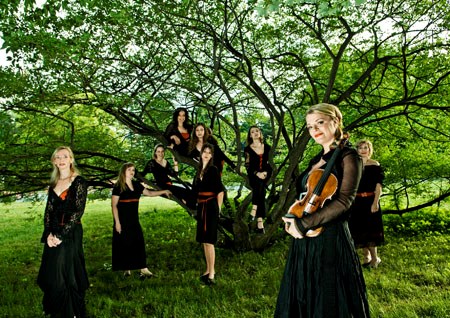 A trio of Okanagan violin students has been selected to study with internationally acclaimed violinist Angèle Dubeau in Kelowna on Sunday, March 2.

A jury reviewing audition recordings over the past month have chosen students Angela Ruthven and Melissa Wilmot of Kelowna, and Ali Wasiliew of Vernon, to participate in a master class with Dubeau as part of the UBC Okanagan Minds and Music series.

Dubeau and the all-female string ensemble La Pietà will perform at Kelowna’s First Lutheran Church, 4091 Lakeshore Road. In the two-part program, Dubeau will conduct a master class from 3 to 4:30 p.m., with the violin students, then lead La Pietà in concert from 5 to 6 p.m. performing mainly 20th-century music, including music by Canadian composers.

“Ms. Dubeau and the jury expressed a preference to work with fewer students, and in more detail on repertoire suitable for a 1.5-hour public master class, so we had to limit the number of selected students to three rather than the four we initially had planned for,” says Manuela Ungureanu, organizer of the Minds and Music series. “The repertoires of these students are complex but quite enjoyable for the general public, and having more time to work through them will definitely benefit all of the participants and make this an even richer experience.”

Tickets to the master class and performance at First Lutheran Church are $15 through Ticketmaster (250-860-1470). UBC Okanagan students and children under 12 get in free.

Proceeds from ticket sales will go toward the purchase of a baby grand piano for the UBC Okanagan campus. Donations are invited for either the Minds and Music program or the piano fund. Contact the UBC Okanagan Development office at 250.807.9251.

For further information on the repertoire for the concert, visit www.ubc.ca/okanagan.

About Angèle Dubeau and La Pietà

Angèle Dubeau is a graduate and First Prize Winner of the Montreal Conservatory of Music. She pursued her studies at the Juilliard School of Music and, from 1981 to 1984, left for Romania to work with Stefan Gheorghiu. Since then, Dubeau has become one of Canada’s most prominent artists.

Winner of several important international competitions, she has performed in prestigious concert halls in more than 25 countries. Her numerous recordings have been acclaimed by both the public and the press, and she is one of the few Canadian soloists in classical music to have two certified gold records for 50,000 albums sold in one year.

In 1997, Dubeau created La Pietà, a string ensemble, bringing together some of the finest women musicians in Canada. Under her direction, the group has acquired a solid reputation. From the start, the ensemble performed in some of Canada’s most prestigious venues, as well as on both the Radio-Canada and CBC television networks. Dubeau and La Pietà play numerous concerts in Canada, including several for women’s charities.

From 1994 to 2005, Dubeau was also a Radio-Canada television personality, hosting concert broadcasts and weekly music programs. Dubeau became a Knight of the Ordre National du Québec in 2004, a Member of the Order of Canada in July 1996, and in the same year, the Société Saint-Jean-Baptiste awarded her the Calixa-Lavallée prize for her exceptional contribution to classical music.