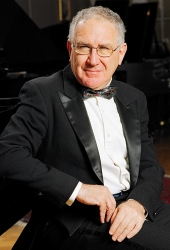 The fourth season of UBC Okanagan’s Minds and Music concert series will get underway Sep. 17 with a performance by renowned pianist Robert Silverman.

Recognized as one of Canada’s premiere musicians, Silverman’s career has spanned more than five decades, during which time he climbed every peak of serious pianism — lauded performances in prestigious halls across the globe, orchestral appearances with many of the world’s greatest conductors, and award-winning recordings distributed internationally.

Silverman’s performance is the first of six free concerts that will be held throughout the 2008/2009 season. The concerts will present a mixture of genres – from jazz piano and voice to orchestra rehearsal and piano recitals — showcasing the talent of well-established artists from the Okanagan, British Columbia, and beyond.

“The idea of the concert series is to provide a setting for raising questions, and thus learning about the many facets of musical performances, including their social and musical history,” says UBC Okanagan philosophy professor Manuela Ungureanu, organizer of the series. “The concerts are designed for both the experienced and for the novice — perhaps even unconvinced — members of the audience.”

Ungureanu says Silverman’s powerful yet romantic keyboard performance will be accompanied by educational commentary on classical paintings and poetry with Silverman and experts from UBC Okanagan’s Faculty of Creative and Critical Studies guiding the audience on a sensory journey that combines art, music and education.

“Minds and Music also showcases our faculty’s related projects and ideas,” says Ungureanu. “Through their introductory comments they bring music to life, raising interest in both the music and its many connotations.”

The concert will be held from 2 to 3:30 p.m., Wednesday, Sep. 17, in the Student Service Centre Lecture Theatre SSC026 at UBC Okanagan.

For more information about the 2008-2009 Minds and Music concert series visit http://www.ubc.ca/okanagan/publicaffairs/mindsandmusic.html.