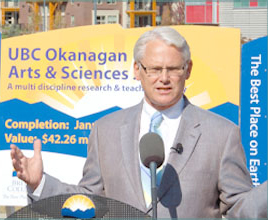 Premier Gordon Campbell kicked-off construction today for the home of the Southern Medical Program, which will train doctors in the Okanagan for the first time in B.C. history.

The groundbreaking ceremony marked the start of construction of the Health Sciences Centre, as well as UBC Okanagan’s new Arts and Sciences 2 Building, and the Engineering/Management Building.