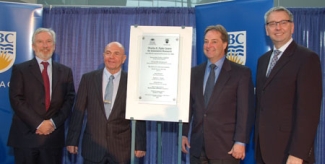 Named for Charles Fipke, the Kelowna geologist who discovered North America’s first commercial diamond pipes in Canada’s North, the Fipke Centre is the first new academic building to be completed as part of the UBC Okanagan campus master plan. The facility was made possible through a $5-million gift from Fipke’s foundation (plus $2 million for equipment) and $26.5-million from the B.C. Ministry of Advanced Education and Labour Market Development.

“I am very grateful for the education and the experiences I had at UBC as a student,” said Charles Fipke, who received a Bachelor of Science (Honours) degree in geology from UBC in 1973. “Throughout my career as a geologist I have applied what I learned and it has served me well. I welcomed the opportunity to give back to UBC in a way that will directly help today’s students obtain a great education, and help a new generation of science exploration and research thrive right here in the Okanagan.”

“A broad range of study choices is now open to students from the Okanagan and from other parts of the province and beyond,” he said, “and this creates an enormous boost to the local economy.”

As one of the world’s top 35 universities, UBC has a globally recognized reputation for research excellence and that reputation also applies to UBC Okanagan, noted Professor Stephen Toope, President and Vice-Chancellor of UBC.

“This wonderful facility will enhance classroom learning by providing new space for teaching,” said Toope. “But we are also extremely excited by the new research space – the labs in which tomorrow’s discoveries will be made by our professors and our students.”

“Teaching and research are our top priorities, and the Fipke Centre represents a major expansion in our capacity to excel in both areas ” said Doug Owram, Deputy Vice-Chancellor at UBC Okanagan. “This new facility supports learning with state-of-the-art technology, and is designed to encourage interaction between students and their professors, and between academic disciplines.”

The Fipke Centre earned an unprecedented five Green Globes from the Building Owners and Managers Association of Canada last year. Equivalent to a LEED Platinum standard, the designation of five Green Globes is reserved for designs serving as national or world leaders in energy and environmental performance, and follows an extensive audit of the building’s project management, energy, resources, emissions and indoor environment. The Fipke Centre was the first laboratory building in Canada to achieve such a rating.

The campus-wide geoexchange system is projected to reduce UBC Okanagan’s carbon dioxide emissions by more than 88 per cent, or 2,959 tonnes per year, equivalent to taking 14,000 cars off the road over the next two decades. The cost avoidance will be $350,000 per year when existing buildings and academic buildings currently under construction are connected. In the future, annual cost avoidance will grow to an estimated $610,000 once the entire campus master plan has been built out.

UBC Okanagan has published a website with more information about the sustainable features of the Fipke Centre and other sustainability initiatives across the campus. Visit: http://people.ok.ubc.ca/publicaffairs/update/2008-Fall/site/fipke.html