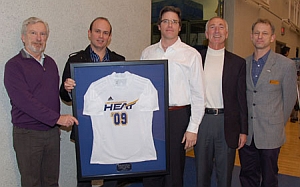 The university announced Friday night that Capri Insurance has established an endowment that will provide a $2,500 scholarship each year, renewable for four years, to help top scholars who are also top athletes attend UBC Okanagan.

“This new scholarship will enable us to recruit some of the very best student-athletes for our programs,” notes Rob Johnson, Director of Athletics and Recreation at UBC Okanagan. “Our varsity athletics program has built a tradition of success at the provincial and national levels, and we expect to continue achieving at a high level with support from partners like Capri Insurance.”

The new scholarship for student-athletes was announced between the women’s and men’s Heat basketball games against rivals from Vancouver Island University, on an evening dubbed “Capri Insurance Night” at the UBC Okanagan Gymnasium.

“We want to support and invest in UBC Okanagan because that is an investment in our community,” says Robin Durrant, Chief Executive Officer of Capri Insurance. “We value the strength and commitment student-athletes show in balancing academics and athletics, and we know that this balance produces future community leaders. This award will help attract, recruit and retain these leaders in our community.”

Over the past three years UBC Okanagan teams have won 11 provincial medals, two provincial championships, sent five teams to nationals, and won national silver and bronze medals. Three of the four teams are currently nationally ranked in the top 10, with the women’s volleyball team ranked Number 1 since November 4, 2008.

As a next major step, UBC Okanagan hopes to move its women’s and men’s basketball and volleyball teams to the Canada West Universities Athletic Association – the highest level of varsity competition in Canada.

“In getting to this point in our development, UBC Okanagan has worked hard to provide its coaching staff the tools required to recruit effectively,” says Johnson. “The Capri Insurance Athletics Entrance Scholarship takes this one step further – it is great for our student-athletes, our programs, and our community.”