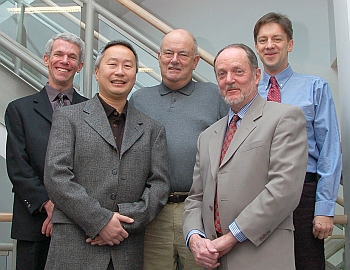 A new $25,000 endowment has been created at UBC Okanagan by Direct Energy Business Services to provide financial assistance to students studying sustainability and environmental sciences.

The endowment will support the Aidan Kiernan Direct Energy Scholarship in Sustainability and Environmental Sciences, and recognizes the work of professional engineer Aidan Kiernan who retired at the end of February after serving as UBC Okanagan’s Associate Vice-President of Operations, and previously as Associate Vice President of Campus Development and Facility Management at the former Okanagan University College.

“As they embark on their own careers, we hope the next generation of science and engineering graduates from UBC Okanagan will show the kind of enthusiasm that Aidan Kiernan has shown for building sustainability into every project he has been involved with,” says Michael Baetz, Vice President and General Manager of Direct Energy. “We’re very pleased to honour Aidan by providing, in his name, financial support for students pursuing education in sustainability and environmental sciences.”

Kiernan has a long history of seeking ways to apply alternative energy systems. He introduced a seawater heat exchange system for the marine science facility when he worked at Memorial University in Newfoundland. At Okanagan College’s KLO Road campus in Kelowna, he devised a system that captures heat from the City of Kelowna’s neighbouring wastewater treatment plant.

In 2005, Kiernan brought that experience to UBC Okanagan, working with engineers and hydrogeologists to explore a geo-exchange system for the campus – a system that is now a reality.

Heating and cooling buildings at UBC Okanagan using groundwater will save a bundle in energy costs. The geo-exchange system cost approximately $6 million — $1 million more than a conventional fossil-fuelled heating plant – but the entire system and retrofitting existing academic buildings is being funded by the new system’s operational savings, estimated at $350,000 a year.

The Aidan Kiernan Direct Energy Scholarship award will alternate each year between the Irving K. Barber School of Arts and Sciences and the UBC Okanagan School of Engineering. The first awards will be available for the 2009/2010 Winter session.