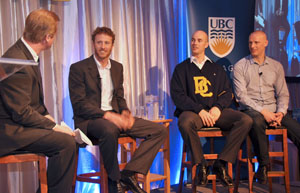 “We sold every single ticket for the fourth consecutive year and every dollar raised at this event is used to provide financial assistance to our student athletes, helping them to reach their goals,” said Rob Johnson, Director of Athletics and Recreation. “With UBC Okanagan matching funds, this morning’s event pushes our four-year total over the quarter-million dollar mark.”

Members of the UBC Okanagan Heat coaching staff were also recognized provincially and nationally, with women’s volleyball head coach Steve Manuel winning the B.C. Coach of the Year award and the prestigious award as National Coach of the Year Across All Sports.

“These achievements are a testament that we are on the right path,” said Johnson. “And we’ll continue to provide more athletics opportunities for our student athletes and also provide more entertaining athletics events for the university and the community as we grow.”

The Scholarship Breakfast Endowment, along with other sources of student athlete financial assistance, helps student-athletes maintain the delicate balance required to achieve both academic and athletic success.

“The scholarship fund and past sponsor support has given me and other student athletes the chance to reach our potential,” said student Ashley Pereira, a member of the UBC Okanagan Heat women’s soccer team and recipient of a Canadian Colleges Athletic Association National Scholar-Athlete award this year.

Being a competitive soccer player, holding a part-time job and attending to her academic studies would have been very difficult without some scholarship assistance, said Pereira, noting that during her five years as a student-athlete, scholarship support has grown.

“This increase in scholarship funds allowed my stress factor to be somewhat relieved,” she said. “I still worked, however, it was far less — and I found that I was no longer worrying about buying text books. Instead that was replaced by exams and whether or not we would have to run 150s in practice.”