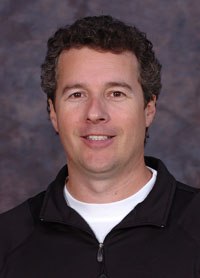 Steve Manuel, coach of the UBC Okanagan Heat women’s volleyball team for the past eight seasons, has been honoured by the Canadian Colleges Athletic Association (CCAA) as Canada’s top coach across all sports.

As recipient of the 2008-2009 Coaching Excellence Across All Sports Award, Manuel was recognized for his contribution to the sport, as well as his positive leadership and commitment to educational goals.

“Steve strives to develop his student-athletes and team to their full potential,” says Rob Johnson, Director of Athletics and Recreation at UBC Okanagan. “His technical knowledge and teaching ability — combined with his intense coaching style and sense of humour — are what make him an excellent coach. The team atmosphere he creates is one of support. His student-athletes are encouraged to push themselves, striving for excellence without the fear of failure.”

Since Manuel’s first year coaching in the BCCAA, the Okanagan program has flourished, continually building teams that are competitive and strong both provincially and nationally. Manuel’s coaching record in league play is 103 wins, 37 losses (.736). Over his career, he has 143 wins, 64 losses (.691).

Former players have gone on to pursue volleyball opportunities beyond UBC Okanagan, in Canadian Interuniversity Sports and at the national and international level.

Coach Manuel is known as one of the premiere coaches in British Columbia, conducting himself with integrity and class on and off the court, noted the CCAA in announcing the award today.