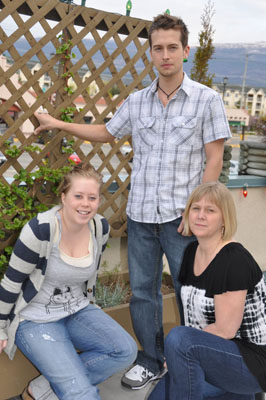 An interactive game that educates student nurses about standards of practice will be launched at various health institutions in the Okanagan during National Nursing Week, May 11 to 17.

Modeled after the hit TV game show Jeopardy, the game is used to help communicate to the nursing community in a fun and engaging way the College of Registered Nurses of British Columbia (CRNBC) Standards of Practice as well as CRNBC’s role in regulating registered nurses and nurse practitioners.

The initiative is a collaborative effort between the College of Registered Nurses of British Columbia (CRNBC) and nursing students at UBC Okanagan and UBC’s Vancouver campus.

“Nursing is a very collaborative profession and developing this game gave students an opportunity to work together on a tool that will help student nurses come to better understand the principles behind their practice,” says Diane Betman, a Master of Science in Nursing student at UBC Okanagan who participated in the project. “Recently there have been many changes with nursing and this project is a fun way to get the message out to nurses on the front line. The game offers a way to apply the Standards of Practice, not just memorize them.”

Working with more than a dozen nursing students from the CRNBC Student Representative Programs at UBC’s Okanagan and Vancouver campuses, CRNBC developed this Jeopardy-style game with clues and questions based on essential information outlined in the Standards of Practice.

“CRNBC provides support to registered nurses to understand and apply the standards so that the public receives safe, competent and ethical care,” says Paula Araujo, Nursing Practice Advisor for CRNBC, the regulatory body for registered nurses and nurse practitioners in the province.

Donna Kurtz, associate professor in the School of Nursing and CRNBC student representative faculty liaison, says the collaborative project was a great way for nursing students to connect with members of the local nursing community and help that network grow and move forward.

“Our UBC students have become community leaders and ambassadors of the Standards of Practice,” says Kurtz. “They are not only networking and working with the local community, but they are supporting their colleagues in ongoing learning.”

Araujo, Kurtz and a number of UBC Okanagan students will be hosting the Standards of Practice game at various health care facilities in the Okanagan throughout National Nursing Week.