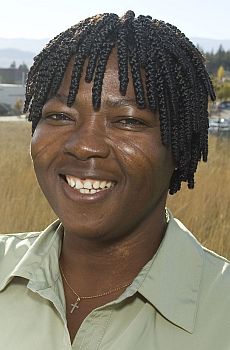 Vida Yakong, a UBC Okanagan graduate student from Ghana, has just returned from Washington DC where she spent four days as a guest of the World Bank. It was an important trip for Yakong — and one that could lead to improved health care for women and children in sub-Saharan Africa.

Yakong is pursuing a PhD in medical anthropology, nursing, and anthropology of gender and is one of 10 women from around the world selected this year to receive a $12,000 grant from the Margaret McNamara Memorial Fund (MMMF).

Administered by the World Bank, the fund awards educational grants to women from developing countries whose graduate studies and future plans are directed at improving conditions for women and children in their respective regions.

The grant will support Yakong’s research in rural northern Ghana where the fertility rate is nearly seven children per woman and maternal mortality rates are among the world’s highest. In that region, for every 100,000 live childbirths, as many as 500 women die during pregnancy, childbirth or in the days after delivery. The United Nations Millennium Development Goals for women’s reproductive health in sub-Saharan Africa include objectives to reduce by three-quarters the maternal mortality ratio and achieve, by 2015, universal access to reproductive health care.

“In 10 years, I know there’ll be a huge difference,” says Yakong, but she notes that right now in northern Ghana those goals are a long way off. Little progress has been made toward reducing the maternal mortality rate, for example, and her research will help to identify some of the cultural and social reasons behind that.

After earning a Bachelor of Science in Nursing degree in Kelowna in 2004, Yakong returned to Ghana where she worked as a nurse practitioner. She later returned to UBC Okanagan on a scholarship supported by School of Nursing faculty and community residents to pursue a master’s degree. In June 2008, Yakong was UBC Okanagan’s first Master of Science in Nursing graduate.

Her visit to Washington DC this week included tours of the World Bank and the U.S. capital, a recipients’ forum with World Bank Group vice president Joy Phumaphi about the previous and future research being done by this year’s 10 grant recipients, and a formal dinner hosted by the World Bank Family Network.

Yakong notes that the MMMF grant is welcome recognition for important work to be done, but it also has particular significance for international graduate students.

“International students have very limited access to grants, so this has really made a great impact,” she says.

“It is motivating and energizing, and tells me that what I am doing is making a difference. This kind of recognition urges you to do more.”