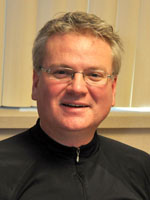 Where will tomorrow’s green jobs be in British Columbia? Ken Carlaw, associate professor of economics at UBC Okanagan, is working on that question today.

“The way we live as a society is not sustainable in its current form, and we need to start changing that now,” Carlaw says. He is leading a team of researchers in developing a strategy — policies for employment and industry — to guide the transition to an industrial production system in B.C. that is socially just, carbon neutral, and economically and environmentally sustainable.

“We are looking at the current B.C. economy in terms of its industrial practice and where green jobs reside. Then we’re figuring out what the system has to look like in 2050 or 2100 for us to move into a situation where our production system and employment is sustainable,” says Carlaw.

“The B.C. government is currently trying to develop a green jobs strategy, and we want to have them move towards a policy that makes this transition without harming the segment of society most vulnerable to these kind of policy changes – low income individuals and families.’”

This October, Carlaw will present a paper at the Canadian Society for Ecological Economics’ 8th Biennial Conference that proposes a definition of green jobs linked to broad industrial production practices in B.C., and which provides a benchmark of the B.C. industrial structure’s current use of green jobs — and its potential for creating them.

“So far the research suggests that B.C. is a long way from a green jobs industrial base,” says Carlaw. “There are some industries, mainly in the service sector, that have green jobs within them, but these jobs rely on inputs generated in other industries that are not produced with green jobs.”

However, Carlaw notes significant potential exists for creating green jobs in B.C., particularly if alternative fuels become viable as a source of energy used in existing service jobs. For example, oil and gas producing industries could be replaced with a system that produces alternative and ecologically neutral energy sources.

“All of this of course will take time — and political and social will. At the moment, the way we work and produce in B.C. is not particularly green,” he says.

The challenges for Carlaw and his research team begin with defining a green job. “Our definition of green jobs is any job that’s ecologically neutral in terms of its impact,” he says. “Obviously, that’s not true for many things in B.C.’s production system now.”

A good example, Carlaw says, is the agriculture industry — although it may appear green, in reality it is far from sustainable.

“Right now the amount of arable land is shrinking and the amount of food production we require is rising, and the only way we’re actually keeping pace with the increased demand is by using petroleum-based fertilizers,” says Carlaw. “We’re substituting arable land for these fertilizers and actually increasing the carbon footprint of that particular type of production. The issue there is how we get to a situation where the work, employment and production in the agricultural industry are ecologically neutral, and that is a very difficult thing to try to figure out.”

The biggest challenge may be convincing politicians, policy-makers and the general public that action is needed. “Our job is going to be to try to get people to continue to buy in and take action towards moving to more sustainable practices and policy,” Carlaw says.

“One of the big problems we’ve discovered is that nobody wants to talk about climate change. It’s too big. It’s too hard. The problems are too many and too complex to resolve. Our challenge is to try to get public perception at the level of communities switched around.”

This green jobs research is a starting point for Carlaw’s work on Industrial and Employment Strategies for Sustainable Production in the larger Climate Justice program.

The other three streams of research explored in the Climate Justice initiative are: