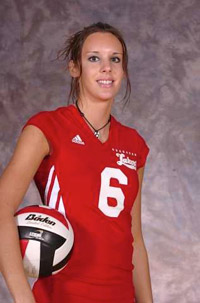 For the third consecutive summer, Kelowna’s Marisa Field has been selected to represent Canada on the international volleyball stage.

Field is a graduating member of the UBC Thunderbirds, coming off back-to-back Canadian Interuniversity Sports (CIS) national titles. She got her start in post-secondary volleyball as a member of the UBC Okanagan program.

Field competed for the Okanagan Lakers (predecessor of the Heat) during the 2004-2005 and 2005-2006 British Columbia Colleges’ Athletic Association (BCCAA) seasons, capturing numerous awards and provincial medals in both her seasons at UBC Okanagan.

During the 2005-2006 season, the UBC volleyball coaches  — Steve Manuel at UBC Okanagan and Doug Reimer at UBC in Vancouver — worked together to plan a course to ensure Field’s continued development as an athlete.

“Doug and I both knew that Marisa had the ability to be an impact player at the CIS level,” says Manuel. “The timing was right for her to move to Vancouver in September of 2006, we had prepared her for CIS competition and the Thunderbirds were in need of another middle blocker. We definitely missed having Marisa in our lineup but we couldn’t be more proud of her accomplishments in CIS and on the National Team.”

Field will suit up for Canada at the 25th Summer Universiade (FISU Games) from July 1 to 12 in Belgrade, Serbia.

Women’s Volleyball standout and national champion Alex Basso was selected to the 20U Team BC squad that will play in the 2009 Canada Summer Games.

Preston Tucker will be a representative of the UBC Okanagan Heat Men’s Volleyball on the 21U Team BC squad as they also compete in the 2009 Canada Summer Games.

Both Basso and Tucker recently competed for Team BC at the USA Open Championships in Minneapolis, Minnesota. Basso and the women’s team finished in 10th place at the event and Preston helped the men’s team to a silver-medal performance at the championship.

This year’s Canada Summer Games will be held in the cities of Charlottetown and Summerside, Prince Edward Island, from August 15 to 29. The games will bring together approximately 4,500 athletes, coaches, managers and officials with participation from every province and territory in Canada.