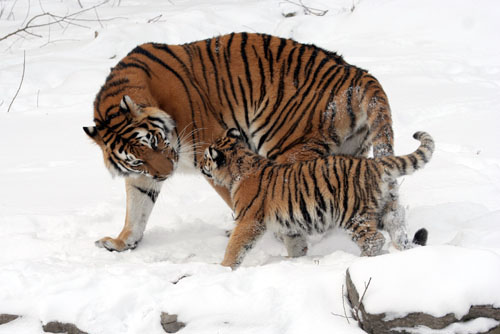 Sungari, an Amur tiger, with one of her cubs at the Buffalo Zoo. The world's captive Amur tiger population may be an important reservoir of gene variants that have been lost in the wild population. (Photo by Dave Pape)

They’re big cats with a very small population. Although about 500 Amur (Siberian) tigers live in the wild, the dwindling genetic diversity of this critically endangered species — the largest of all cats — means genetically the population behaves as if it were just 27 to 35 tigers.

This tiny effective population size is one of the findings published this week in the journal Molecular Ecology by an international research team led by conservation geneticists Michael Russello and Philippe Henry from the University of British Columbia (UBC) Okanagan campus in Kelowna, B.C.

Russello and Henry’s team compared the amount of genetic variability remaining in the wild compared to the world’s captive population. They also studied the history of the wild population and how a development corridor between the cities of Vladivostok and Ussurisk in the Russian Far East has affected the population genetic structure of the remaining wild Amur tiger population.

“This effective population size estimate was for the entire population of Amur tigers,” Russello points out. “In actuality, it seems that Amur tigers are residing in two fairly independent populations on either side of the development corridor between Vladivostok and Ussurisk, further lowering effective size for each.” One of these wild populations may be as small as 26 to 28 individuals, and the other even smaller with an effective size of just 2.8 to 11 individuals.

Native to Far Eastern Russia’s Amur-Ussuri region, the Amur tiger has been on the brink of extinction for a century. Due to human pressures, its population plummeted to around 30 individuals in the 1940s. Conservation efforts in the wild have enabled the population to rebound to an estimated 500 individuals. In the meantime, a captive population was set up mainly in European and North American zoos, with a total of 421 individuals.

“As there are likely more Amur tigers in captivity than remain in the wild, we were curious as to how well the captive population represents the extent and distribution of genetic variation remaining in the natural population,” says Russello. “Such information can inform captive breeding efforts as well as potential reintroduction strategies if warranted in the future.”

Overall, he says, the results indicate the need to secure ecological connectivity between the two Russian populations to minimize loss of genetic diversity. The results also support a previous study suggesting that the captive population may be a reservoir of gene variants lost in their natural habitat.

Co-authors of the study also include Taro Sugimoto of Japan’s Hokkaido University, Dale Miquelle of the Wildlife Conservation Society, D. McCullough of the University of California, Berkeley, and Gisella Caccone of Yale University.