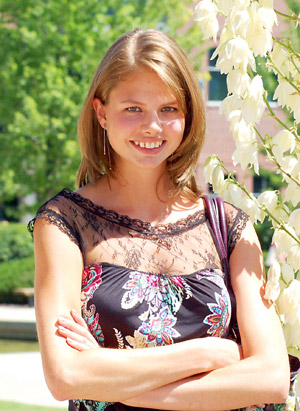 Researcher Nicol Patricny is entering her fourth year of the Bachelor of Science in Psychology (honours) program at UBC Okanagan.

A research project by UBC Okanagan psychology student Nicol Patricny is looking at the public’s perceptions of guilt and blame in mentally ill people who have committed a violent crime.

“The aim of the project is to examine people’s opinions about how much guilt mentally ill violent offenders feel for their offense, as well as how much the offenders themselves blame external sources such as outside social pressures, versus internal sources such as poor self-control,” says Patricny, who is entering the fourth year of the Bachelor of Science in Psychology (honours) program.

“As well,” says Patricny, “the study will examine how public opinions of guilt in mentally ill offenders vary across different categories of mental illness, including psychotic disorders, mood disorders and personality disorders.

The research project is supported by the Irving K. Barber Endowment Fund Undergraduate Research Awards (URA) program, and is the very first study to look at this issue.

“There has been research on how mentally ill offenders feel about their own actions, but never on how the public thinks they feel in regard to guilt and blame,” says Patricny.

An anonymous online survey with 36 questions was set up from May to the end of July to gather data. The survey poses a set of vague hypothetical crime scenarios, with the mental disorders of the ‘offenders’ varying. This allows Patricny to look at how people’s opinions of guilt and blame in mentally ill violent offenders may change depending on the disorder of the offender.

Patricny says the research topic has generated overwhelming interest, with more than 500 people in the Central Okanagan completing the survey.

“I am getting significant results, which is great,” she says. “I even had emails from people saying ‘I’m really interested in your study because my loved one has a mental illness.’ I think that was why there was such a big response — a lot of people are affected by mental illness in some way, or they know someone who is.”

Although analysis of the data has just begun, some of the survey’s initial results suggest gender does not play a role in the public’s opinion of how a mentally ill offender feels about their crime.

Under the direction of her UBC Okanagan faculty supervisor, Mike Woodworth, Patricny hopes to submit her undergraduate study to a journal.

“The whole experience has been really interesting,” she says. “I’ve wanted to be involved with research since my first year of university, and to have the chance to do it as an undergrad is a unique opportunity. As students, we’re always given information, and we learn new information, and here I am making the information and putting it out for other people and that is really rewarding.”

Patricny plans to continue her research this fall through an honours thesis by visiting a forensic hospital with mentally ill patients who have committed crimes, to give the same guilt and blame survey to the patients, and comparing responses from the public and actual offenders.

“The idea is to see what the offenders reported for themselves and then what people thought the offenders were feeling, and see if there is a difference. If I am seeing people’s perceptions are not accurate then this research could be a source of education for people to re-think their perceptions and can perhaps help reduce the stigma of mentally ill offenders.”

The Irving K. Barber Endowment Fund has supported 14 Undergraduate Research Awards this summer. In addition to receiving funding for the research itself, students receive a salary to conduct the research following their third year of studies, providing a unique opportunity to work a summer job that is directly relevant to their undergraduate pursuits. It also gives students hands-on career experience and raises their profile for potential graduate programs.

“Through the research lens, our students gain a broad perspective not only about the world but also about themselves,” says Mathieson. “Whether in or out of the classroom, collectively we are committed to inspiring our undergraduate students through research – it’s a key component of teaching and learning.”