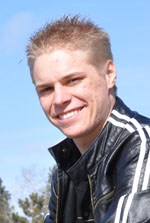 Daniel McMann received a Bachelor of Arts degree from UBC Okanagan in June, and is now the first recipient of the new Farris, Vaughan, Wills & Murphy LLP Graduate Award that will help the 22-year-old attend law school.

Created by Farris’ Kelowna managing partner Dominic Petraroia and partner Ross Langford — both of whom have law degrees from UBC — the award provides an annual $1,000 award to a student graduating from UBC Okanagan’s Irving K. Barber School of Arts and Sciences who has taken courses focused in law and shows great promise in the field of law.

“We wanted to recognize the hard work of students who study law at the undergraduate level, and encourage them to pursue a law degree,” says Petraroia. “One of the ways we can provide that encouragement is to ease the financial burden of students as they move on to law school.”

In establishing this award, Farris, Vaughan, Wills & Murphy LLP is contributing $5,000 a year for five years, with $1,000 each year given to a graduating student and $4,000 invested in an endowment fund. At the end of the five years, the endowment will be $20,000, which will then generate the annual award.

“We believe the concentration in Canadian law is a great new opportunity for students at UBC Okanagan,” says Langford. “The strength of tomorrow’s law community depends very much on the excellence and enthusiasm of today’s law students. We’re pleased to help promising students pursue careers in such an exciting, rewarding and important field.”

McMann attended UBC Okanagan on a $20,000 four-year major entrance scholarship from UBC, awarded for academics and community stewardship. While pursing his degree in economics with a minor in political science, he was actively involved in campus life, working as a resident advisor and serving as an announcer for the basketball and volleyball teams. He says his education so far has prepared him well, and as he explores his options for law school over the coming year, he’s wide open to a lot of career possibilities.

Farris has had a long and successful association with the UBC Faculty of Law. During the 1930s and ’40s, the firm’s founder, Senator John Wallace de Beque Farris, rallied community support for a B.C. law school. He was instrumental in convincing the provincial government to provide $10,000 in funding, allowing UBC to create the law school in 1945.

For decades, Farris has continued its support of UBC including a donation of $1 million in 2006 to support the Faculty of Law’s efforts to construct a new law school building at UBC’s Vancouver campus.