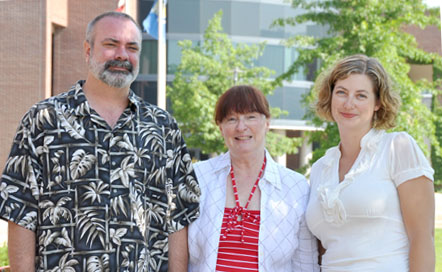 Anthropology students at UBC Okanagan this year will be studying with a new and distinctly Canadian textbook authored by one of their own UBC Okanagan professors.

In a project spanning two years of editing and writing, Roberta Robin Dods, associate professor of anthropology at UBC Okanagan, has adapted one of the most successful U.S. textbooks in cultural anthropology to create an edition with a uniquely Canadian perspective.

Published by Oxford University Press Canada, the book was designed for cultural anthropology courses at the first- and second-year levels, and explores the diverse factors that interact to shape human cultural practices. 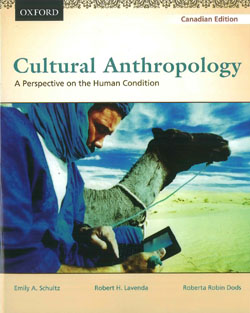 “The anthropologists here at UBC Okanagan are a very active team,” says Dods. “As such we can offer students a dynamic and challenging place to study. UBC Okanagan has an inclusive approach — we are building an environment in which researchers share with each other and students are included in the conversation. I wanted this kind of tone in this textbook.”

The perspectives of Canada’s Aboriginal communities provide another important aspect to the Canadian edition.

“In this edition, First Nations voices have been included in the opinion pieces,” says Dods. “We need to include the voices of the people who are gifting us with information about their lives. In teaching anthropology students, it is important to emphasize that people who are sharing their lives with us are giving us a sacred gift — and such gifts require a deep responsibility on our part.”

Building on the foundations of Emily A. Schultz and Robert H. Lavenda’s original U.S. text, now in its seventh edition, this first Canadian edition introduces Canadian issues and examples that make the subject come alive for Canadian students, and demonstrates the breadth and depth of anthropological research being carried out in this country.

“What we offer in this textbook are the tools for analysis,” says Dods. “Inevitably, students appreciate how this book, and anthropology as a subject, situates them in a world of change and challenges them to be concerned citizens of that world.”

In their own words…

Several UBC Okanagan anthropology professors were invited to contribute to the Canadian edition of the textbook. Presented as “In their own words” features, their brief essays include:

– Indigenous medicine and identity in Nicaragua, in which Hugo De Burgos looks at how medical systems are more than social schemes for healing.

“They are also systems of ecological adaptation, explanatory models for physical and social suffering, and mechanisms for social control,” writes De Burgos, citing how the people of Veracruz del Zapotal in Nicaragua have used their Indigenous medicine as a strategy to claim and assert their precariously kept ethnic identity.

– Ethics, anonymity, and authorship in community centred research, by Mike Evans, head of Community, Culture and Global Studies at UBC Okanagan, which explores how respect for privacy and confidentiality fits into research ethics.

Myth primogeniture and long-distance trade-friends in Northwest New Britain, Papua New Guinea, in which Naomi McPherson examines how trade-friendships, kinship, and economics are intimately intertwined. She emphasizes how human existence is spiritually and materially enriched by the interlinkage of all aspects of existence.

– The Round Robin Healing Circle, by Christine Schreyer, outlines her initial field experience in 2005 and one of the programs to retain the Tlingit language of the Taku River Tlingit First Nation in Atlin, B.C.

“The Tlingit language is an endangered language, and within their community there are less than five elders who are fluent in the language and no children learn Tlingit as their mother tongue,” Schreyer writes.

Water as a commodity in the Okanagan Valley of British Columbia, by John Wagner, illustrates how human conflict is often driven by competition for resources, and how water in the Okanagan region has become a commodity prized by recreational tourism and housing industries.

“The orchard oases that surround the lakes at lower elevations enhance the aesthetics and economic value of lakeview properties, but, ironically, the orchard industry is in decline precisely because of this new form of commoditization,” says Wagner, whose research examines water and the consequences of its commoditization.