UBC team looks below ground to learn about healthy forests 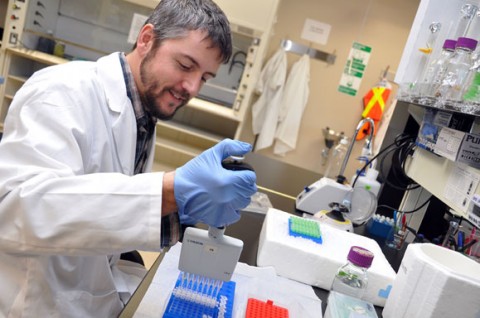 UBC researchers are looking below ground in a forest near Kamloops, B.C., to better understand how the health and survival of Douglas fir trees may be affected by the relationships and connectivity of webs of fungi that grow on tree roots.

Called mycorrhizal networks, these interconnecting webs of fungi are believed to transfer nutrients, water and carbon between two or more plants, potentially improving the survival of seedlings connected to old trees. The research could have implications on forest management policy and practices, and offers more evidence supporting the preservation of old growth forests. 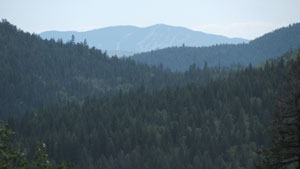 “The functional aspects of mycorrhizal networks are very important and there is substantial evidence now that suggests the transfer of important nutrients, such as nitrogen and phosphorus, occur from one plant to another through this web-like underground system,” says Dan Durall, associate professor of biology and physical geography at UBC Okanagan. “However, no one has ever looked at the structure of these networks.”

“Soil ecology is still largely a black box in terms of the diversity of organisms,” adds Kevin Beiler, a PhD forest sciences student from Vancouver who has partnered on the project, along with co-investigator Suzanne Simard, professor in forest sciences at UBC in Vancouver.

The study focuses on Interior Douglas fir, one of the most economically important lumber species in B.C., and one that depends on mycorrhizal fungi for its establishment and growth. Findings suggest older trees have more connections than younger trees — indicating that larger trees in a forest ecosystem act as the ‘hubs’ of the fungal network, and the smaller trees are peripherally connected through those hubs.

A good metaphor, says Durall, is to look at the North American airline system as a mycorrhizal network, and people as the nutrients traveling from one location to another. If you suddenly removed Chicago’s international airport – one of the busiest airports in the U.S. – there would be a significant change in how people traveled within that network. There may be alternative types of networks to travel, for instance the highway system, but the removal of an important hub would influence how effectively people moved around.

The study provides useful information for forest management professionals, as old-growth trees have traditionally been harvested for their economic value without a full understanding of their role in ecosystems.

“It challenges some of the paradigms that forest managers use when they prescribe management applications for forests,” says Beiler, explaining that Douglas fir has commonly been harvested by selection systems, or high-grading which basically removes the tallest, largest, straightest trees. This has been thought to release the remaining younger trees from competition, allowing them to become the next dominant trees in the canopy.

“However, it might not be as simple as a competition-based model,” Beiler says. At certain distances from a mature tree, facilitative effects provided to the younger trees by older trees may outweigh any competition for light or space.

“When you pair what we found in terms of the structure of such networks with what is known so far about the functioning of the network in the very dry Interior Douglas fir forests, then it’s pretty safe to say removing a large tree could, in some cases, reduce early regeneration success of seedlings that are naturally regenerating under the canopy,” says Beiler.

“The middle-aged trees that are in the most competitive stage could be a different story,” Beiler notes. “But in terms of regenerating new seedlings and in terms of biodiversity — the largest trees support the most organisms — larger, older trees are playing an important role in the health and regenerative capacity of the forest ecosystem.”