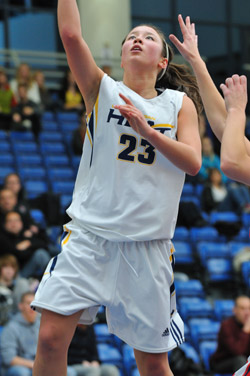 UBC Okanagan Heat guard Madison Kaneda of Vernon and teammates will take on the best teams in Canada when they host the CCAA National Championships March 18 to 20.

“We are very fortunate to have these two organizations take a lead role in sponsoring this event,” says Johnson. “Without them and all our other sponsors, putting on a national championship would be next to impossible.

“Basketball fans in the Okanagan region are in for a real treat,” he says. “This event brings together the top eight teams from across the country to compete for national bragging rights. The level of play is exceptional.”

Dino Gini has been selling real estate in Kelowna for 19 years and is actively involved with Kelowna’s basketball community, either as a coach for successful high school teams or as a community sponsor.

“I am thrilled to play a role in such an elite tournament at UBC Okanagan,” says Gini. ‘This tournament will show case the top players in Canada and our very own UBC Okanagan Heat. I look forward to watching Coach Heather Semeniuk and the Heat players work towards their ultimate goal of winning the national championship at home in front of family and friends.”

Investors Group Okanagan Regional Director Paul Demay says he is very excited to be a part of a tournament in which top student athletes from all over Canada will come together to decide a champion.

“Attaining the national championship level is a great achievement built on the hard work and dedication of many people working together,” said Demay, whose years of community involvement include serving on the boards of the Kelowna Family Y and the United Way. “Investors Group is proud to be a Presenting Partner and we salute the athletes, coaches and team officials who continue to compete at a very high level and strive for excellence.”

For more information on the tournament including schedule and ticket information visit www.goheat.ca/nats.