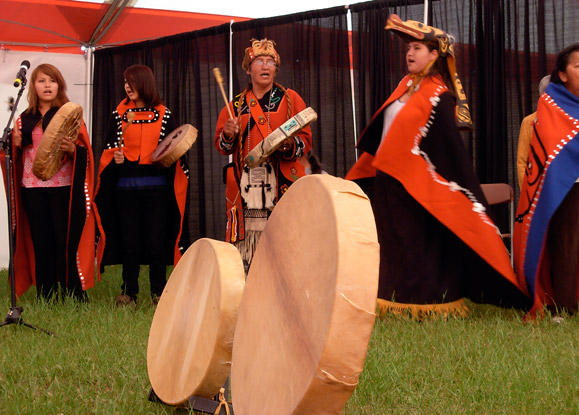 Members of the Taku Kwaan Dancers performing at the Atlin Arts and Music Festival in 2009. -- Christine Schreyer photo.

A UBC Okanagan professor is headed to the Olympics as part of an ongoing research initiative that studies how Indigenous communities are trying to revive their endangered languages.

Christine Schreyer, assistant professor of anthropology, has been working with the Taku River Tlingit First Nation from Atlin, B.C. on language issues for more than five years. Next week, she will accompany the community’s Taku Kwaan Dance group to Vancouver, where they will be performing at the Aboriginal Pavilion at 11 a.m. on February 19. 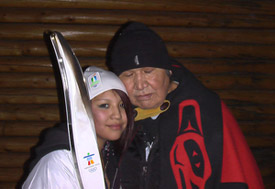 “My research looks at what communities are doing to preserve their languages that are in danger of becoming extinct, and the Tlingit language is one of those languages,” says Schreyer.

The dance group, which sings and introduces songs in their native tongue, has been very effective in endorsing the language since the group formed four years ago. “The dance group teaches people not only the language itself by performing the songs of their ancestors, but also how to follow cultural protocols and the importance of traditional regalia, helping people to connect with their identity,” Schreyer says.

“It’s through the songs, drums, art and stories about the songs that enthusiasm is generated for the language,” says Wayne Carlick, the dance group’s leader. “It sets some foundation for our children to see how important it is to sing and speak, and now write the beautiful sounds of the Tlingit language.”

Of the 61 Aboriginal languages in Canada, only three are expected to survive: Cree, Ojibway and Inuktitut. Schreyer hopes her research with the Tlingit First Nation will serve as a model for ways to preserve more languages within First Nation communities.

“It’s very important to try to preserve the language of Aboriginal Peoples, as there is so much knowledge about the land and environment that lives within their language,” she says.

Part of Schreyer’s research looks at how land planning and language planning can work together, and how saving an endangered language can potentially help preserve the environment and the species that reside there.

“Indigenous People have lived on the land for generations and are invaluable sources of information,” says Schreyer. “The Tlingit see their language as a resource for sustainability, and when they talk about language and how they’re going to use it in the future, it is very much connected to the land.”

In addition to the success of the dance group, the Taku River Tlingit First Nation has promoted its language through the development of a language curriculum, which Schreyer helped plan in partnership with community leaders.

“We actually created a board game that features a big map of their territory, and you move through it collecting resources like berries and fish, learning the names of the places and items as you go along,” she says.

Over the last five years, Schreyer has noticed that the community’s efforts have had an impact: a change in who speaks Tlingit.

“It is being used more frequently and casually by not only the children who were being taught the language in school, but by their parents,” says Schreyer. “The fact that there are adults who have never taken a language class, but want to embrace it and use it is very important.”

After the Olympics, Schreyer travels to London, England, to present her research findings at an international conference on sustainability and language use.