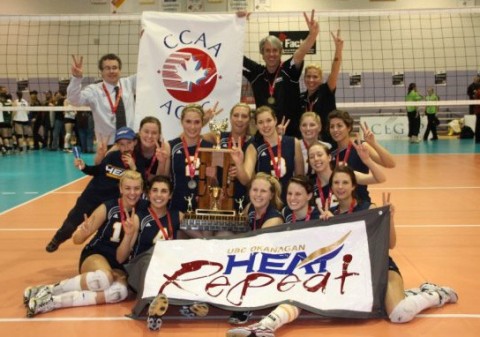 The Quebec City team put up a good fight, but the attacks came from everywhere from the Okanagan squad. The Heat were impressive and put on a show that will not be forgotten for quite some time, said head coach Steve Manuel.

Setter Caitlin Nyhus (Penticton, BC) delivered the goods and her hitters responded, peppering the FX Garneau defense with powerful attacks. Championship MVP Alex Basso (Kelowna, BC) was good for 12 kills, and Leigh Dreher (Prince George, BC) added 11 kills. Sara Zaytsoff (Langley, BC) added12 points of her own with 4 blocks and 8 kills, including a kill score the championship point.

Kirsten Lawson (Brandon, MB) had 6 kills and 2 blocks for points, Kaylan Gouldsborough (Summerland, BC) chipped in 5 kills. Libero rookie sensation Lenai Schmidt (Vernon, BC) was spectacular on defense and passed amazingly throughout the match and was the only libero selected to the all star teams.

It was a back-and-forth battle in the first set, but FX Garneau were able to pull ahead midway through. When the Heat were down 14-18 in the first set, Leigh Dreher went back to the service line and run off 4 straight serves to tie things up, then Alycia Bradstock came into the match at 19-19 and served 5 straight points.

UBC Okanagan came up with a couple of big plays that turned the tide for the rest of the match as they went on an 11-3 run to take the first set 25-21. The Heat jumped out to a couple of quick leads in the second set and never looked back from there winning 25-19 and convincingly in the 3rd set 25-12.

“FX Garneau is a great team and they played great tonight,” said Manuel. “They pushed us from the first serve and never quit but our crew played like true champions tonight and would not be denied this title. Our passing and defense was stellar which allowed us to run an almost unstoppable offense, add in some clutch serving and that was the recipe for success.

“I could not be prouder of the 12 athletes and my coaching staff of Karl Enns, Becki Kosinski and Jackie Wong for buying into what we had planned for the season and believing every step of the way that we would repeat as National Champions,” said Manuel.

This concludes a great weekend of quality matches and a top-notch organization for the Cégep de l’Outaouais, who hosted a national event for the first time.