Researchers from the University of British Columbia have partnered with Aboriginal communities in northwestern B.C. to create a community report meant to foster conversations about secondhand smoke and the importance of creating smoke-free spaces.

The report specifically addresses tobacco reduction for pregnant Aboriginal women, mothers and their children. Due to numerous factors — for example, lack of child care services and affordable housing — these groups are often exposed to secondhand smoke. 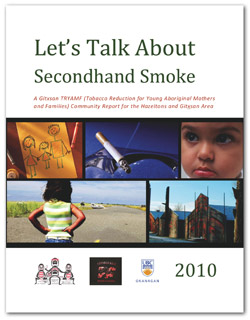 “The awareness that was raised by doing the interviews and surveys for this study was a big part of the impetus for making changes in our communities,” says Debbie Sullivan, a community health nurse at the Gitsegukla Health Centre in Hazelton, B.C. “We are very excited that all our community halls are now smoke-free and we think it is a result of bringing this topic to people’s attention through this research.”

British Columbia boasts one of the lowest smoking rates in the country, however, First Nations communities in B.C. are estimated to have smoking rates of 50 to 60 per cent, and in Inuit populations the rate increases to 60 to 70 per cent — well above the average smoking percentage of non-Aboriginal communities.

The community report, titled Let’s Talk About Secondhand Smoke, was created through a collaboration involving UBC researchers from the Okanagan and Vancouver campuses, the First Nations and Inuit Health Branch of Health Canada, Gitsegukla Health Programs and Services, and members of the First Nations communities in the Hazelton and Gitxsan areas.

“It was very important to us to work within the communities, as partners, and listen to the people who live there to gain a better understanding of secondhand smoke exposure in order to find meaningful solutions to the problem,” says Joan Bottorff, director for the Institute for Healthy Living and Chronic Disease Prevention at UBC’s Okanagan campus.

“People in these communities were very concerned about secondhand smoke, particularly in regards to the effects on children and elders.”

The community report was created using information compiled from interviews with community workers as well as two community surveys that gathered people’s attitudes and opinions on secondhand smoke. More than 450 people took part in the surveys.

The report addresses many complex factors contributing to secondhand smoke exposure, and highlights the strong desire of many to create smoke-free spaces. It also identifies influential people — such as elders, found to be highly respected and valued members of the community — who may be able to act as advocates for change.

“What the community report really does is provide a tool to guide future conversations,” says Bottorff. “It helps identify where people are exposed to secondhand smoke, creates awareness about factors influencing the issue, and identifies that there is a desire to change.”

And although the report was done specifically for people in the Hazelton and Gitxsan areas, Bottorff believes it could be used by other First Nations communities concerned about the impact of secondhand smoke exposure.

“I suspect there are some other First Nations reserve communities that face similar challenges, obstacles and desires when it comes to secondhand smoke,” she says. “They may be able to see themselves in this report, identify similarities and differences, and begin to identify strategies for their own communities.

“Structural changes are needed to make First Nations communities smoke-free, but one thing this research showed us is that when people act together they can bring change.”

Over the course of the project, Bottorff says she actually witnessed this change, with an increasing number of communal places becoming smoke-free in Hazelton and Gitxsan.

“I don’t think our research can take all the credit for that,” says Bottorff, “although perhaps raising the topic of secondhand smoke and helping the conversation unfold may have helped in some small way.”

The Let’s Talk About Secondhand Smoke community report for the Hazelton and Gitxsan areas can be found online at circle.ubc.ca/handle/2429/36622