Visitors to UBC’s Okanagan campus in Kelowna will get a bilingual experience while travelling the campus roads. New street signs feature both English and Nsyilxcen, the traditional language spoken by the Okanagan’s original people. 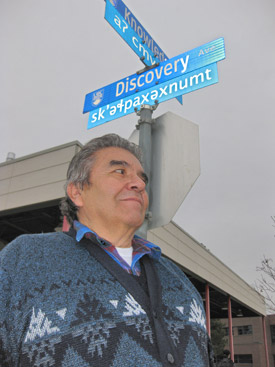 Okanagan Language instructor Richard Armstrong stands with one of the new street signs on UBC's Okanagan campus. The Penticton Indian Band member is a driving force in keeping the culture of the Okanagan Nation alive for future generations.

The signs display new names for several previously unnamed roads on campus, which will help emergency services such as police, fire and ambulance navigate the rapidly growing campus community. As well, address numbers are being placed on buildings for easy visibility from the street.

Street names were chosen to represent various attributes and components of the university community such as Athletics, Discovery, Knowledge, International, University, Diversity, Alumni, Residence and Research.

The university’s street naming committee consulted the Okanagan Language Authority for translation of the street names, and the Authority approved the words.

“I think UBC Okanagan is doing an excellent job of raising awareness of the Nsyilxcen language, as well as acknowledging their traditional lands with these signs,” says Christine Schreyer, an anthropology professor whose research interests include preserving the endangered languages of First Nations communities. “One of the main challenges Aboriginal languages face across Canada is their lack of status in comparison to English and French, and this is definitely a step in the right direction.”

While many buildings on the campus have new physical street addresses, the mailing address for the entire campus community is still 3333 University Way.