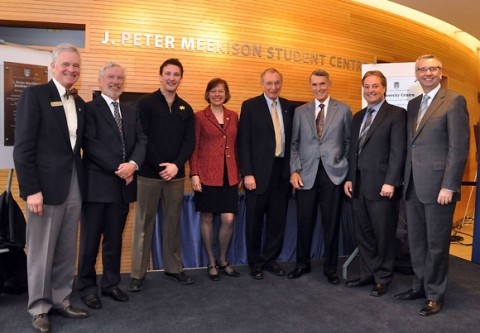 University Centre, a $33-million, 7,300 sq. m. (79,000-sq.-ft.) building, was completed in time for the start of classes last fall and is home to a host of student- and university-delivered services for students. Friday’s official opening ceremony included the formal dedication of the first floor as the J. Peter Meekison Student Centre. 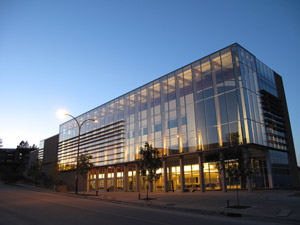 The J. Peter Meekison Student Centre is a place for students to meet, have a meal, study, and access a wide range of services and amenities including UBC Students’ Union Okanagan offices, the UBCSUO used bookstore, a 100-seat cinema, The Well pub, a branch of Valley First Credit Union, many clubs and The Phoenix student newspaper.

The UBC Students’ Union Okanagan’s contribution to the new facility included $3 million presented to the university in February.

“From the establishment of British Columbia’s first university at Fairview in 1908 to the Great Trek to Point Grey in 1922, and from the call for an Okanagan campus early in this new millennium to the support of these facilities by the UBC Students’ Union Okanagan, students have powerfully supported and shaped the university we know today as UBC,” said UBC President Stephen Toope.

In recognizing the university’s other major funding partners, Brad Bennett, Chair of UBC’s Board of Governors, also thanked Jim Meekison for honouring his brother Peter in naming the student centre, and Robert and Barbara Atkinson and Stephen and Kathy Bellringer, who joined with Jim Meekison in contributing $2 million to the facility.

Peter Meekison was the public administrator appointed by the B.C. government to oversee the transition from the former Okanagan University College into two new institutions: Okanagan College and UBC Okanagan in 2005.

Doug Owram, Deputy Vice-Chancellor and Principal of the Okanagan campus, noted that when the new UBC campus opened nearly five years ago, there were about 3,000 students – a population that has grown dramatically.

“Today, we have more than 6,200 students and over the next couple of years we will grow to 7,500 students,” he said. “This building — with the services it accommodates, the spaces it provides for our students — is a crucial component of our overall campus master plan, and is a vital part of our campus life.”