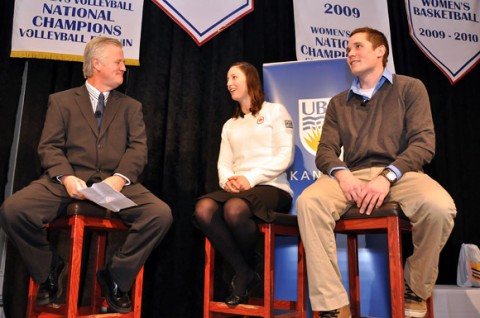 UBC President Stephen Toope told a Kelowna audience of 350 people on Friday morning that sport, universities and student-athletes all have the power to transform, and he cited the positive impacts of the 2010 Olympic Winter Games as a prime example of this power.

“Is it just me, or does something feel a little different this year?” he asked the fifth-annual Valley First UBC Okanagan Athletics Scholarship Breakfast at the Coast Capri Hotel. “Don’t we all feel just a bit different than we did before the 2010 Winter Games?”

Toope said UBC has partnered with the Vancouver Olympic Organizing Committee to create the UBC Centre for Sports and Sustainability, to investigate the ways sport transforms people, communities and cultures to deliver lasting benefits.

The galvanizing experience of successfully hosting the Olympics was transformational for B.C. and the entire country, he said. Through sport’s ability to create transformation, UBC itself has even greater opportunities to serve important social needs in the community, “thanks in no small part to our student-athletes, whose accomplishments in competition tend to overshadow their contributions to community and humanitarian interests.”

“Dozens of student-athletes at our Okanagan campus have become similarly involved in a growing community outreach program, focusing on initiatives in support of the food bank, environmental stewardship, and one that is particularly relevant for UBC Okanagan, the Wendy’s Dream Lift program for sick children.”

“At a time when we have been so vividly reminded of the power of sport to transform, there can be no question that our student-athletes merit the greatest possible support from their university, its alumni and the wider community,” said Toope.

Serwa, a 20-year-old Ski Cross sensation from Kelowna, placed just out of the medals at the 2010 Winter Olympic Games in February, and last month won a World Cup race in Switzerland.

Egan is a native of Vernon and fourth-year biology student. He is currently juggling academics at UBC Okanagan while maintaining an extensive training and competition schedule.

Fellow student-athlete Dustin Luck, captain of the UBC Okanagan Heat men’s soccer team, spoke about the importance of scholarships, and the value of retaining top-calibre athletes here at home. Luck’s hard work and dedication to academics have earned him multiple scholarships, including a Sun-Rype Founders’ Scholarship, President’s Entrance Scholarship, Gyro Club of Kelowna Bursary, and the Trek Excellence Scholarship for Continuing Students.

“Scholarships can be the difference in attracting outstanding students with options anywhere in the country,” said Doug Owram, Deputy Vice Chancellor and Principal of UBC’s Okanagan campus. “The endowment supported by this morning’s community event makes those scholarships possible. The success of our Heat teams is proof that your support matters — and that it works.”

UBC Okanagan has applied for membership in the Canada West Universities Athletics Association, and after being deferred for a year the Heat application goes to the membership committee again in May.

“We have used the past year to improve our application and our teams are clearly itching to make that move,” Johnson said.