Public invited to UBC education forum on genocide and the Holocaust

The Okanagan campus of UBC will host the second annual Holocaust and Genocide Education Forum on May 6. The forum brings together those who have witnessed genocide and those who study genocide with the goal of fostering public discussion and awareness.

Supported by the university’s Human Rights and Equity Services office, the forum contemplates the past and present global issues of the Holocaust and of genocide, and takes a look at Canada’s own history and some of the complicated questions surrounding Indigenous displacement. 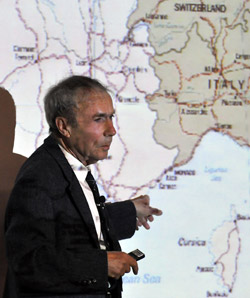 Holocaust survivor Rene Goldman will speak at the public education forum at UBC in Kelowna on May 6.

Initially offered only to Grade 11 and 12 social studies and history students, this year’s event will be open the public.

“Events like this are so important because it asks us as a community to reflect on the genocidal tendencies that may be concealed in every society — including our own — and buried within every person, even ourselves.”

Jones is the Executive Director of Gendercide Watch — a non-profit organization that aims to raise awareness, conduct research, and produce educational resources on gendercide. He was selected one of ‘Fifty Key Thinkers on the Holocaust and Genocide’ for the book of that name to be published in 2010.

Claude Desmarais, Reichwald Professor in Germanic Studies, will also speak at the forum, as will Rose Caldwell, a fourth-year Indigenous Studies and Anthropology student. A member of the Westbank First Nation (Band) and the Okanagan Nation, Caldwell represents the second generation suffering from the effects of residential schools in Canada.

Other presenters include Rene Goldman, a child survivor of the Shoah (Holocaust), who will talk about his personal experiences in France, French complicity and the Jewish resistance efforts, and Regine King, who survived the 1994 Rwanda genocide, in which she lost her immediate family and many members of her extended family.

The Holocaust and Genocide Education Forum takes place Thursday, May 6, from 9 a.m. to 12:30 p.m. in the Fipke Centre, room FIP 204, at UBC’s Okanagan campus. There is no cost to attend the event and no registration is required.