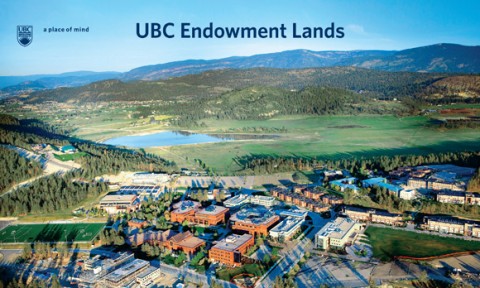 The University of British Columbia’s Okanagan campus will soon double its land area, as the UBC Board of Governors today approved the $8.78-million purchase of 103.6 ha. (256 acres) of North Glenmore farmland from the City of Kelowna.

“This is an unprecedented and extremely important event in the history of UBC,” says Brad Bennett, Chair of the Board of Governors. “We’re grateful to the City of Kelowna for being such outstanding partners and for the opportunity to acquire this land. This ensures that UBC’s Okanagan campus can respond to the future needs of our region, our province and the country. The possibilities are limited only by vision and imagination.

“Endowment assets are a legacy held in perpetuity for the benefit of the university, to support the core mandate of UBC. Because of this, the Okanagan campus will be a direct beneficiary of the land, and of the future teaching, learning, research and recreational opportunities it will support.”

When UBC established its Okanagan campus five years ago, it acquired the former Okanagan University College’s North Kelowna campus, comprising approximately 105 ha. (260 acres) along Highway 97. The new lands are located between the current campus and Glenmore Road to the west. Sale of the North Glenmore property is expected to be complete by the end of June, and will be funded by UBC from its discretionary endowment over the next 30 years.

“I am truly pleased that we have been successful with our discussions with UBC Okanagan on this mutually beneficial agreement,” says Kelowna Mayor Sharon Shepherd. “The City looks forward to continuing our relations as we plan for future road and trail networks as well as land dedicated to civic use and environmental protection.”

The University and the City of Kelowna are collaborating on plans for a public trail across the property, future roads (alignments to be determined), and to protect the two water bodies — Roberts Lake and a smaller nearby pond — as natural areas.

“I want to thank UBC’s Board of Governors for their vision and support for the new UBC Endowment Lands, and the City of Kelowna for being a strong supporter of this university,” says UBC President Stephen Toope. “The addition of these 256 acres increases the UBC land endowment to more than 1,500 acres. Together, we are building an outstanding university campus in the Okanagan and an extraordinary UBC system in British Columbia.”

“This campus has grown dramatically in its first five years,” says Doug Owram, Deputy Vice Chancellor and Principal of the Okanagan campus. “We have nearly doubled our numbers in many key areas, including student population, faculty and staff, and our facilities will soon have three times the floor space we had in 2005. And today, we are effectively doubling our land area, creating a resource that will help ensure our long-term future.”

Since UBC’s Okanagan campus was established five years ago, more than $400 million has been invested in new academic and student residence construction on the Okanagan campus, including the new Engineering-Management building, Health Sciences Centre, and Arts and Sciences II projects currently under construction. 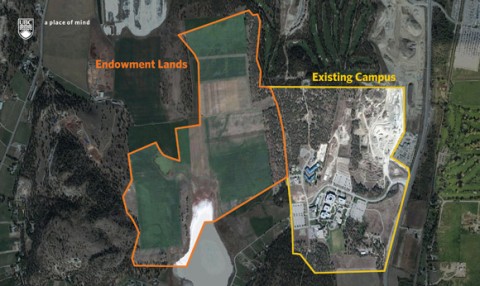