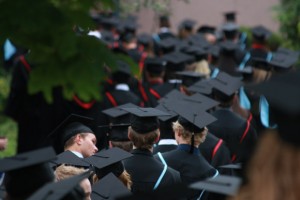 The University of British Columbia’s fast-growing Okanagan campus celebrated the achievements of its Class of 2010 on Friday in four ceremonies held on campus. That’s one more ceremony than in previous years, recognizing 866 undergraduate and 70 graduate students receiving their degrees.

This year’s class included the first graduates from the School of Engineering, as 56 students received their Bachelor of Applied Science degrees in civil, mechanical and electrical engineering.

“It is a momentous day,” UBC Chancellor Sarah Morgan-Silvester told graduates during her address. “It’s a day that acknowledges the substantial effort that goes into obtaining a degree with close to 20 — or perhaps even more — cumulative years of learning. Congratulations.”

“I am sure that during your time at UBC you have all striven mightily or you would not be here today,” he said. “The world out there is filled with millions upon millions of people who want their life and the lives of their children to be better than the lives of their parents, and they are educating themselves to make that happen. They are trying very hard.

“I hope that you, graduates, will strive to protect the values that you hold dear,” he said. “Strive to better understand people of diverse backgrounds. Strive to integrate the gifts that international experience can bring to your life. And of course, strive always to be the best that you can be.”

“Today you start the next stage of your life,” said Doug Owram, Deputy Vice Chancellor and Principal at UBC’s Okanagan campus. “Have faith in your ability. Whether you’re going to graduate school or beginning a career, remember that the successes you’ve had already should give you confidence and the skills you need. Use your skills, use those talents, use your education to make a difference as well as a career.”

Rachael L’Orsa, graduating with a Bachelor of Applied Science degree in mechanical engineering, spoke on behalf of the graduates in the first Convocation ceremony of the day.

“We have chosen professions in which each of us has the ability make an impact on individuals, where we have the power to work for the betterment and protection of people, places and species,” said L’Orsa. “We are all bound by our experiences, by our commitment, and by our achievement here today because we are all members of a community that begins here at UBC Okanagan and which will spread across the world as we seek our individual places within it.

“By attending the vibrant young campus of such a well-established, respected university, we have afforded ourselves phenomenal opportunities. Not only did we benefit from small class sizes, enthusiastic professors, and access to world-class research experience, we have also put ourselves in a very unique position in which we are history in the making. So let’s all be mindful of this and repay this institution by remembering that UBC Okanagan’s reputation will be what we make of it.” 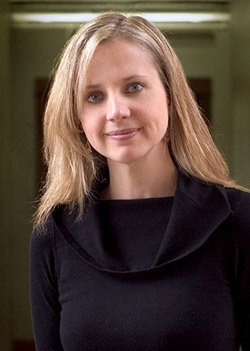 An honorary UBC degree was conferred upon Dr. Samantha Nutt at a Convocation ceremony on Friday afternoon at UBC’s Okanagan campus. UBC President Stephen Toope cited Dr. Nutt as “a medical doctor whose compassion and action have helped ease suffering and made the world a better place for us all, but in particular for the children of war-ravaged regions.”

Dr. Nutt is the founder and executive director of the humanitarian organization War Child Canada. She is a medical doctor specializing in maternal and child health in zones of armed conflict, family medicine, public health, refugee health and women’s health.

Over the course of her professional career and through her work with War Child Canada, Dr. Nutt has spearheaded efforts to provide direct humanitarian support for the world’s war-affected children.

Her passion for advocacy emerged from her years living and working in areas of conflict, such as Somalia, Liberia, Burundi and Iraq. Dr. Nutt realized early in her career that there was a need for an organization that would advocate and create change for children, and that could move beyond the normal concept of charity.

By the time she was 28 she had brought together the partners and resources necessary to establish War Child Canada. This organization has effected change directly, immediately and without compromise, providing long-term programming for war-affected children and their families, and promoting greater awareness in Canada concerning the rights of children everywhere.

Known for inspiring others to make a difference in the lives of those affected by war, she continues to work with the United Nations and non-governmental organizations around the world.

These degrees are conferred honoris causa — “for the sake of honour,” and are intended to recognize individuals who have made substantial contributions to society at the provincial, national or international levels. 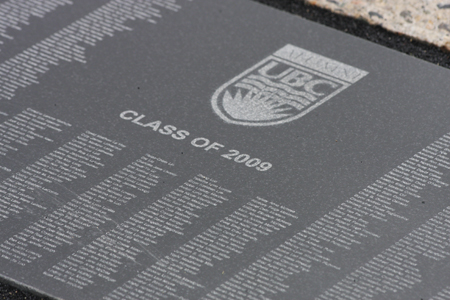 With a legacy gift symbolic of lifelong ties, the Class of 2010 at UBC’s Okanagan campus has placed a first commemorative stone tablet in the main courtyard walkway.

The names of last year’s Class of 2009 grads are engraved on the tablet, and at Convocation time each June new tablets will be placed citing names of the previous year’s graduates, as a lasting tribute to each and every proud alumnus who learned, worked and played at the UBC Okanagan campus. 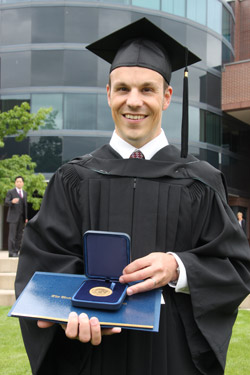 Valentin Koch received his Master of Science degree in mathematics today, along with the Governor General's Academic Gold Medal awarded to the top graduate student at UBC's Okanagan campus.

The medal is awarded each year to the student at UBC’s Okanagan campus who achieves the highest academic standing at the graduate level. Since it was first awarded in 1873, this medal has become one of the most prestigious awards a student in a Canadian educational institution can receive.

Originally from Switzerland, Koch was a senior software engineer before starting his studies at UBC, where he completed his Bachelor of Science degree with honours in Computer Science and Mathematics in 2008.

As an undergraduate he received the Okanagan Science and Technology Council Prize in Science, and an Undergraduate Research Award from the Natural Sciences and Engineering Research Council.

Moving on to graduate studies, he was selected for a Pacific Century Graduate Scholarship in 2008, was funded through a MITACS Accelerate internship in 2009, and today, he received a Master of Science degree in mathematics.

The next step, funded by an NSERC Engage grant, will integrate his results into a commercial software application.

Graduates by faculty and degree

Faculty of Arts and Sciences