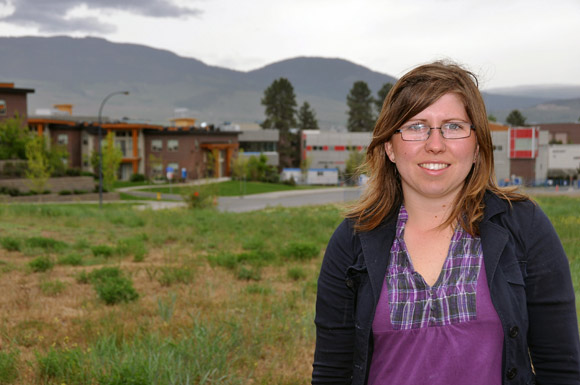 UBC history student Jenna Foster has completed a research project that offers a glimpse into the objectives and effects of the Kamloops Indian Residential School (KIRS) through the eyes of the Canadian government, the Oblate, and Indigenous Peoples.

“The main purpose was to compare the government objectives with Indigenous students’ perspectives,” says Foster, who spent the last academic year sorting through public records and information — such as news clippings, testimonials and archives– for her honours thesis, The Kamloops Residential School: Indigenous Perspectives and Revising Canada’s History.

“I wanted to explore the subject because I was never taught about it,” she says. “Stories about the effects of residential schools are just beginning to emerge and many people don’t recognize the importance of this history. Only recently have scholars and government officials begun to acknowledge detrimental effects of residential schools; public awareness is still very minimal.”

Foster adds that one of the most interesting recurring themes she found during her research was the vastly different perspectives on the same piece of history.

“Often it was like I was researching two totally different historical events,” she says. “Newspaper articles cast everything in a very positive light, portraying it as an act of benevolence — a gift to the First Nations people. But First Nations people did not see it as a positive experience. Some of their personal testimonies are heart-breaking and were very hard to read. Horrible things happened.”

Foster’s research states that the Canadian government and Oblate school instructors believed Indigenous cultures and languages were inferior to those of Euro-Canadians. Through a carefully-designed school curriculum, KIRS instructors aimed to modernize and assimilate Indigenous students by teaching manual skills and agriculture to male students, and by teaching female students home economic skills.

“Although the students gained skills to adapt to Euro-Canadian society at the KIRS, the process had negative effects on their languages, traditions, and communities,” says Foster, who hopes her work will help advance the conversation of the effects of residential schools among scholars, students and even the general public.

Foster graduated last week with a Bachelor of Arts in history, with honours. She was among the first cohort of undergraduate (honours) history students.

“Liberal Arts disciplines in general, and history in particular, sometimes have difficulty asserting their relevance to their society,” says Julien Vernet, Assistant Professor of History and Foster’s faculty supervisor. “Theses such as Jenna’s, which focus on local history, are of interest to the community because they provide fascinating details about the lives of those who lived in their region, and, one hopes, contribute to the harmonious development of a society in which remembrance is a solution to conflict.”