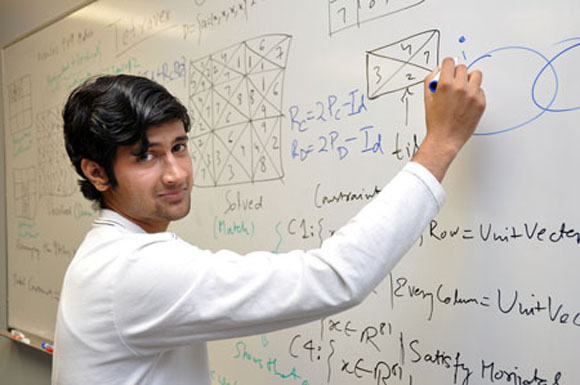 Indian mathematics student Pulkit Bansal is finishing up a 10-week internship at UBC's Okanagan campus, where he has been working with professors Heinz Bauschke and Shawn Wang to solve some difficult mathematics problems

Pulkit Bansal, an undergraduate student from the Indian Institute of Technology in Kanpur, India, is working with mathematicians Heinz Bauschke and Shawn Wang at UBC’s Okanagan campus to develop a computer program that can solve popular logic game puzzles, such as Tetravex.

“My role here was to take this fairly mysterious algorithm that solves a large number of varying problems and design a computer program that uses it to solve the game puzzle of Tetravex and the K-queens problem,” says Bansal.

The algorithm, known as heuristic, is a series of steps that need to be followed to find a solution to a particular problem.

“The K-queens problem is basically the question of how you place eight queens on an 8×8 chessboard in a way that no two queens can attack each other,” says Bansal. “We generalized this problem to a board of any size, and created a computer program that provides the solution.”

Researchers don’t yet understand why the heuristic algorithm is, in some cases, so effective in solving such a variety of problems — proving useful in everything from solving the game of Sudoku to improving radiation therapy for cancer patients.

Bansal says his experience at UBC has met, if not exceeded, his expectations and provided him with a wonderful opportunity to advance his skills. “It has been simply great working with Heinz and Shawn,” he says.

“The whole experience has been very beneficial. Not only did I improve my programming and analytical skills, but through the MITACS Globalink program I’ve been able to improve on my networking, teamwork and presentation skills.”

“Pulkit has been a real delight,” says Professor Bauschke. “He is really smart, and his project allowed us to solve the K-queens problem and Tetravex in a very cool way — using heuristic algorithm rather than blindly trying all combinations.”