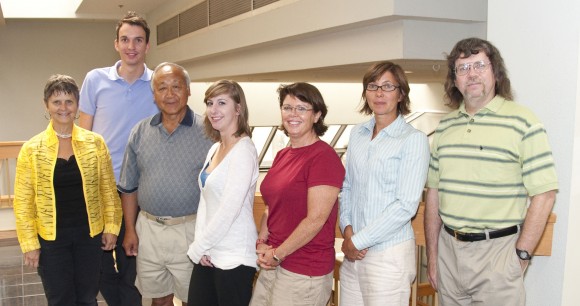 Lindsay Amantea and Ross Huyskamp, undergraduate history students at UBC’s Okanagan campus, are working with the City of Kelowna’s Community Heritage Commission on research projects to recognize and raise the profile of two important historical sites in downtown Kelowna.

“Kelowna’s historic Chinatown site was home to the majority of Kelowna’s Chinese population, beginning in the late 1800s, with the last traditional business closing in 1978,” says Huyskamp. “It is estimated that in 1909, 15 per cent of Kelowna’s total population was of Chinese descent.”

One of the most significant findings made by Huyskamp was the discovery of an original building from Chinatown that still remains in Kelowna’s downtown core.

“My research suggests that the building located at 265/269 Leon Avenue has survived,” says Huyskamp. “It formerly housed Jung Shoe Repair and Kwong Sing Laundry, and was built in the late 1940s.”

Amantea’s research of Kelowna’s historic North End — a residential area predominantly made up of houses built immediately after the Second World War and in the two decades following — found numerous examples of buildings that fit the three distinct designs used to develop the ‘Wartime Houses’.

“The majority of houses that exist in this area are ‘Wartime Houses,’ built by the federal government in response to veterans’ housing needs following the Second World War,” says Amantea. “It was part of a national project to address potential housing shortages and unemployment following the demobilization of soldiers and to help promote post-war economic stability.”

The partnership between UBC and the City of Kelowna was overseen by history professor James Hull and Maria Stanborough, Heritage Planner at the City. Professor Hull’s background in public and urban history helped facilitate the collaboration between City staff and UBC students who conducted their research by studying museum archives, newspaper articles, conducting interviews and walking around neighbourhoods looking for identifying and significant characteristics.

Their findings were presented to the City of Kelowna on Thursday, along with a number of recommendations on ways the City can recognize, preserve and draw attention to the heritage of the two areas.

“This was a great, natural partnership between the City and UBC,” says Maria Stanborough. “The students were able to use their knowledge and skills in a very applicable, practical way, while the City was able to have a meaningful project completed by student researchers who knew what to look for in terms of historical significance.

“It really was win-win for everyone, including the community, because now we have new documentation and recommendations for two areas that are a large part of our city’s vibrant history.”