UBC’s Handel Wright speaks on diversity and communities Oct. 27 and 28 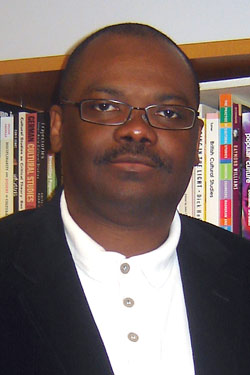 Handel Kashope Wright, one of Canada’s leading cultural diversity researchers, will give two free public talks in Kelowna next month — one at the Alternator Gallery in Kelowna’s downtown on Oct. 27, and another at UBC’s Okanagan campus on Oct. 28.

Wright, who holds the UBC Canada Research Chair in Comparative Cultural Studies, is Director of the Centre for Culture, Identity and Education and professor in the Educational Studies Department at UBC’s Vancouver campus.

The first talk is from 7 to 9 p.m., Wednesday, Oct. 27, at the Alternator Gallery in the Rotary Centre for the Arts, 421 Cawston Ave. Wright will speak about diversity and difference, and the meaning of diversity, with an exploration of Canada’s historical shifting stances — from assimilation to multiculturalism — and the critiques of each. He will challenge simplistic notions of diversity, and present some comparative “outernational” examples such as Hong Kong and Holland for contrast.

“The aim is to lay out not only historical progression but several contemporary options for conceptualizing identity and a diverse society, and taking up difference in such a way that we promote social justice and representation,” says Wright. “I do not attempt to be neutral but rather end with my own recommendations for addressing diversity/difference that is perhaps best suited to a minority empowerment, social justice agenda.”

The second talk is from 2 to 3:30 p.m. on Thursday, Oct. 28, in the Administration building’s ADM 026 theatre at UBC’s Okanagan campus. Wright will present Liquid Community and the Awkward Resilience of Multiculturalism and Multicultural Education, discussing how old conceptions of community based on ethnic or racial uniformity are supposedly giving way to new conceptions that reflect ethnoracial mixing and diversity.

Wright proposes that while multiculturalism and multicultural education may have been appropriate at the very start of this process, they have become awkward — if not outmoded — discourses for depicting and addressing the status quo in society.

“My position is that old, solid forms of community remain as stubborn boulders in the stream of new liquid forms,” says Wright. “I argue, therefore, for the continued relevance and indeed strategic importance of multiculturalism and multicultural education in addressing socio-cultural difference and justice in and through education, and in conceptualizing community in the present moment in which old and new forms of community co-exist.”

Wright’s free public lectures are part of the Cultural Studies Speaker Series organized by the Cultural Studies program at UBC’s Okanagan campus. The talks are supported by donations from the Faculty of Creative and Critical Studies, Community, Culture, and Global Studies (Unit 1) and Economics, History, Philosophy, Political Science and Sociology (Unit 6) of the Barber School of Arts and Sciences, and the Faculty of Education.