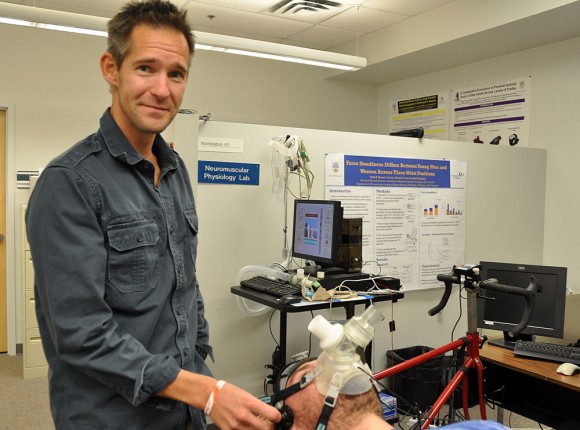 The award is presented annually to one outstanding CSEP member who received their PhD or MD degree within the past 10 years. The individual must be acknowledged to have an excellent reputation throughout Canada and to have achieved notable international recognition.

“Ainslie’s excellent publication record and novel contributions to the field of exercise physiology are features that place him among the top new investigators in Canada,” says Audrey Hicks, president of CSEP. “We are very pleased that our Society is represented by such a high caliber of investigators.”

Ainslie came to UBC’s Okanagan campus in July 2009. Since completing his PhD in 2002, he has published 90 peer-review publications, 10 major book chapters and successfully supervised 10 post-graduate students.

The specific focus of Ainslie’s research is directed to the integrated mechanisms regulating human cerebral blood flow in health and disease. In other words, he studies how blood flows to the brain in a variety of different clinical populations: healthy adults, children, older people, and those affected by a specific health issue, such as heart disease, sleep apnea, dementia or stroke.

“I am honored to have received this award, which is designed to acknowledge young researchers as leaders in their discipline,” says Ainslie. “It helps to reinforce that the research myself, my colleagues, partners and students are doing is helping to push our area forward in terms of new information.”

Ainslie adds that a significant portion of Canadians die from, or live with, diseases that are directly or indirectly caused by improper blood flow the brain, which is why it is essential to better understand the process so improved prevention options and treatments can be developed.

In addition to better understanding the mechanisms of brain flow in various clinical populations, part of Ainslie’s research looks at how effective training interventions and exercise programs can be used to improve blood flow to the brain.