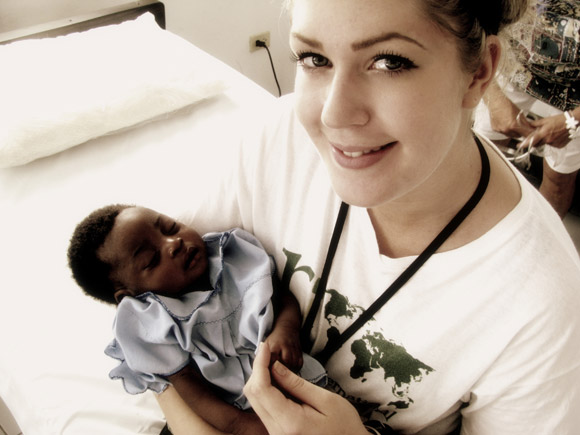 Fallon Smith in a hospital obstetrics room in Haiti last September. The nursing student at UBC's Okanagan campus will return to Haiti next month and hopes to raise $10,000 for families left homeless by last January's devastating earthquake.

After spending two weeks volunteering with a medical team in earthquake-ravaged Haiti in September, third-year UBC nursing student Fallon Smith returned to the Okanagan determined to maintain her connections to Haiti and continue helping the people who live there.

Smith says that after the devastating earthquake in Haiti last January, she felt a strong desire to become involved in the disaster relief efforts and applied to volunteer with a number of organizations lending a hand.

“I was desperate to get involved,” says Smith. “For months I wasn’t able to find a way. Then, someone from an organization called New Reality International contacted me saying I was invited to join their September 1 medical team.”

Although the 20-year-old nursing student had no prior experience in disaster relief nursing, Smith was chosen as the first North American university student ever accepted to go on a mission with the group.

She reflects on her experience as elating, heartbreaking and one of the most worthwhile opportunities of her life. During the trip she assisted hundreds of patients with medical emergencies and sicknesses, some scenarios ending in jubilation and others in gut-wrenching disappointment.

“It was extreme emotions and circumstances,” she says, describing her time assisting in the Haitian Christian Mission’s operating rooms, pre- and post-surgical rooms, emergency, and the walk-in clinic. “And I helped in the obstetrics room with the Haitian midwives, where I had the incredible experience of assisting a birth.”

However, Smith also witnessed a young pregnant woman and her unborn child die due to preeclampsia — a hypertension condition not uncommon among pregnant women in Haiti.

“One of the hardest things was the realization that if we had been in Canada, and had access to the same resources, we could have at least saved her baby. But we lost them both.”

“The interpreters became like family to me,” she says. “Eventually I learned that these young men had their homes destroyed in the earthquake — leaving two of their families living in the decrepit remains of what used to be their homes, and another living in a tent with his six family members.”

Upon her return to Canada, Smith and fellow traveller Nicole Wolf — a photojournalist from the United States — decided to begin a fundraising initiative to help buy the supplies needed to rebuild homes for the three Haitian men and their families. Smith, who will return to Haiti in December, hopes to raise $10,000.

Smith says they have already raised about $6,000. Photos and stories of the three Haitian interpreters are on the Facebook Causes page.

“These men are some of the most incredible people I’ve ever met,” Smith says. “Sacrifice is a word that I never really understood until I went to Haiti and met these guys.”

Donations can be made through the Facebook Causes page or by contacting Smith at falsmi@hotmail.com.

A public forum about Haiti’s post-earthquake relief efforts will be held at UBC’s Okanagan campus from 10 to 11:30 a.m., in the Fipke Centre (roon FIP251).

Students Odd Gleiditsch and Gillian Burt spent time as volunteers in Haiti last spring and summer, and will show a documentary of their project in Jacmel. They will also share their personal stories, and faculty member Jessica Stites-Mor will provide some history and context for the discussion.

The forum will explore media practices, and the pros and cons of how the United Nations, non-governmental organizations, and other aid efforts on the ground.

The student video can be seen online at: www.explore22.com