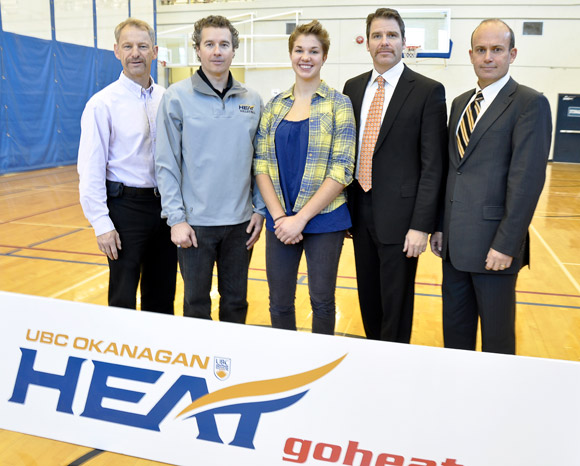 The $2,500 scholarship, renewable for four years, is funded by an endowment established by Capri Insurance in 2009 to help top scholars, who are also top athletes, attend UBC’s Okanagan campus.

“For nearly four decades Capri Insurance has made it a priority to support community growth, vitality and success,” says Capri Insurance Partner Robin Durrant. “Young athletes are a fundamental part of a healthy community and play an important role within universities.

“We are proud to be able to support rising talent and help ensure they can pursue their scholastic and athletic dreams from our university — from UBC’s Okanagan campus.”

A Kelowna native, Proch begins her post-secondary athletics career as a member of the Heat women’s volleyball team with an impressive sports resume: she was starting setter for the gold medal-winning B.C. team at the 2009 National Team Challenge Cup; she ranked sixth overall among B.C. high school prospects, and was widely regarded as the top setter in B.C. under the age of 18.

Proch says she is flattered to be awarded the scholarship and believes it will help her significantly in pursuing academic and athletic goals.

“Getting this scholarship gives me support and motivation to work even harder both in volleyball and in my studies,” she says. “Receiving this reminds me of the things that I have accomplished, and it drives me to do my best to help the UBC Heat be even more successful. I am very fortunate to receive this generous award, and accept it with great expectations of myself.”

Steve Manuel, head coach of the Heat, notes that Proch is an ideal recipient of the award.

“Chandler is an excellent student and an elite athlete with great work ethic,” he says. “She is an extremely enthusiastic individual that is always willing to take on a new challenge. We have watched her development over the past four or five years and she was definitely someone that we wanted in the Heat program. The Capri Insurance Athletics Entrance Scholarship assisted us in securing Chandler in the highly competitive world of volleyball recruiters.”

The Heat volleyball and basketball teams play this season in the B.C. Colleges Athletics Association, and are preparing for a move to the Canada West Universities Athletic Association in September 2011.

Manuel expects Proch to make an immediate impact with the Heat and plans to give her lots of court time in the setter’s position.

“We will look to Chandler to step in and add some depth to the setter’s position but we also see her as being our setter of the future as we make the transition into Canada West,” he adds.