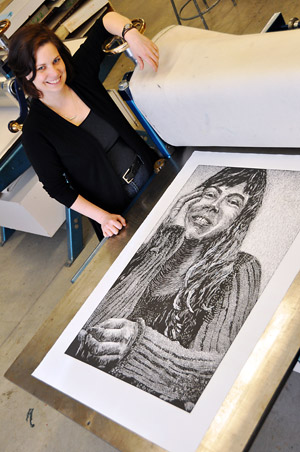 The award consists of one week printing at Muskat Studios in Boston with Tamarind Institute Master Printer Carolyn Muskat.

Widmer will travel to Boston for the Feb. 27 opening reception of the exhibition, where she will meet with famed American pop artist Jim Dine, the juror for the 2011 biennial. Widmer will also give a public lecture about her work at the Danforth Museum of Art in Framingham – the site of the Boston Printmakers Biennial.

“The recognition is certainly valuable from a professional standpoint because it helps me to introduce my work to a North American audience,” says Widmer, “but I’m also thrilled about the very simple fact that someone has taken the time to look at the work and they’ve connected with it in some way — that connection is a large part of what the work is about. And the fact that that someone happens to be Jim Dine, well, that’s just cool!”

Briar Craig, associate professor of printmaking, photography and drawing, says Widmer’s work is receiving a lot of attention and recognition because it is extremely strong and far beyond the typical undergraduate-level printmaking.

“Laura is working on very intricate and delicate portrait images in an effort to convey the subtleties of character,” says Craig. “Her prints are large and extremely well-developed. Particularly when it comes to prints being generated in North America, Laura’s works are extremely fine, extremely detailed and unbelievably labour intensive.  She is in a very small group of artists working this way in this particular medium. ”

This is the second major award recognizing Widmer’s art during the past year. Last May, Widmer earned first prize ($3,000) in the second-annual Open Studio National Printmaking Awards.

“My artistic career is young and my current work functions as a snapshot of where I’m at right now. I know that my skills and ideas will develop over time as I continue working, so I’m curious to see what my art will look like in 10 years,” says Widmer.

“That learning along the way excites me the most,” she says. “The award is very encouraging, especially at this stage in my career, and I’m thrilled that it brings with it the opportunity to travel and work with other printmakers.”