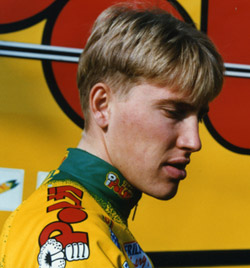 Merckx enjoyed a remarkable racing career, including winning an Olympic medal in 2004. He began his professional cycling career in 1993 as a member of Team Motorola, won the 2000 Belgian National Championship, and participated in eight Tours de France, finishing as the highest-placed Belgian rider six times.

His other accomplishments include Belgian-stage wins in the Giro d’Italia and Dauphine Libere. He has also won the GP Sanson, the Tour de la Region Wallone, the Grand Prix de Wallonie, and the Tour de l’Ain.

Merckx married Canadian triathlete Jodi Cross in 1997, and upon his retirement from racing in 2007, he moved with his family to Kelowna, BC. 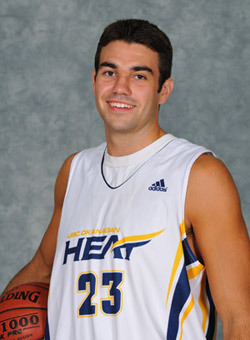 Student keynote speaker this year is Steve Morrison, captain of the Heat men’s basketball team. A graduate of Argyle Secondary School in North Vancouver, Morrison attended the University of Victoria for two years where he was rehabilitating an ankle injury. Following that rehabilitation, he transferred to UBC’s Okanagan campus, pursuing an opportunity to play at a high level while pursuing his Bachelor of Management degree.

He is in the fourth year of his degree program, taking the accounting specialty, and is on track to graduate this spring. After receiving his degree, Morrison hopes to attend law school. Last year, he was on the Dean’s Honour Roll and finished last term with an average above 90 per cent. In his first two years playing for the UBC Heat, Morrison has been named Defensive Player of the Year and a Provincial Championship Tournament All-Star.

“Our goal is to attract high-achieving students with the athletic ability required to be competitive at the national level,” says Rob Johnson, Director of Athletics at UBC’s Okanagan campus. “We recruit these students from within the Okanagan Valley, throughout the province and across the country. Our Athletics Scholarship Endowment helps us provide the financial assistance needed to attract and support these outstanding UBC student athletes.”

Johnson notes that the Valley First UBC Athletics Scholarship Breakfast is the most effective method of donating to athletics because the university matches every dollar raised through ticket sales.

Tickets to the April 8 fundraiser breakfast are $125 (HST included) and can be purchased online at www.goheat.ca/breakfast. For more information, call the Athletics Department at 259-807-9168.