Young astronomer researching the formation of new stars, connections to the universe 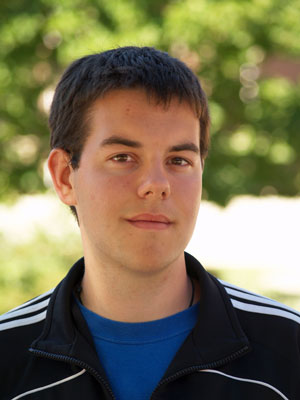 Steve Mairs will boldly go where few undergrads have gone before. The third-year physics and astronomy student at UBC’s Okanagan campus leaves for Hawaii early next month for two weeks study at the James Clerk Maxwell Telescope in Mauna Kea, Hawaii.

Mairs’ research at the renowned telescope supports his honours thesis of how giant molecular clouds collapse to form stars.

“We’re fairly sure we know the life cycle of a star – how it lives and breathes,” says Mairs, 20, who is from Kelowna. “But there are a lot of questions about the time between, such as when a star dies and when a new star will form.”

He credits his professor, Erik Rosolowsky of the Irving K. Barber School of Arts and Sciences with motivating him to pursue his interest. “He propelled my interest infinitely in the subject. I think this is really a beautiful science.” Plus, the intimacy of the classroom experience on UBC’s Okanagan campus has added a dimension to his education that he would not get elsewhere, Mairs says. “This is a really good school with an amazing faculty.”

Rosolowsky and Mairs developed a research collaboration with colleagues in France, who are providing additional data. Rosolowsky says it is “very rare” opportunity for an undergrad student to be able to utilize as important a research tool as the Mauna Kea telescope.

“Steve is the top astrophysics student I have worked with here at UBC’s Okanagan campus, and he is as strong as the students I’ve worked with at Harvard and Berkeley,” says Rosolowsky. “He has a broad research background and I think he could develop into a stellar astronomer.”

Rosolowsky says the study of astronomy provides insight into our cosmic origins and how life could arise elsewhere in the universe.

“Steve’s thesis directly connects to this aspect of astronomy, namely understanding how the stars and stellar system that host life like ours form out of gas clouds in the universe.”

Mairs prefers this road of discovering the nature of the universe. “We are observing nature in its most perfect form in a way that does not change it or interfere with it,” he says.

Mairs’ curiosity about astronomy evolved from the time he was a child. “Growing up in Kelowna, just past Glenrosa, we could see out into the pitch black sky. I would look up into the Milky Way every night and wonder what was out there.”

Mairs is spending his summer at UBC’s Vancouver campus conducting further research for his thesis under the guidance of physics and astronomy associate professor Ingrid Stairs.