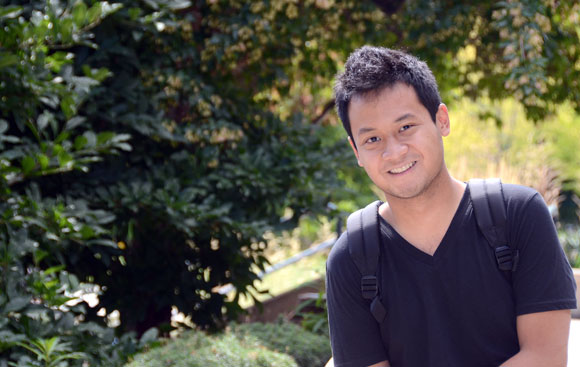 When Adi Prabowo came to the University of British Columbia’s Okanagan campus three years ago, things were challenging for the native of Indonesia, but International Programs and Services helped him through.

Adi Prabowo can’t say enough about the helping hand he got from UBC’s International Programs (IPS) and Services.

When the then 18-year-old came to the Okanagan campus three years ago from his native Indonesia, life was intimidating, but thanks largely to the IPS, Prabowo quickly began feeling at home in his new student life.

“The language was a big thing and the culture was a big jump for me,” says Prabowo who is now in his third year at UBC majoring in psychology and political science. Coming from a predominantly Muslim country, the lifestyle of his new home was an eye opener.

Prabowo also found Canadians tend to do things on their own, whereas Indonesians are more community oriented. All in all, it was a challenging time for the international student.

The biggest challenge, however, was finding a network of friends and adjusting to being away from the familiarity of home. Helping students find friends and adjust to their new world is where IPS and its manager, Teresa Flanagan come in.

“She’s just there all the time,” he says. “She helped me through a lot, everyone there (IPS) did.”

The centre helps international students with health care, academic and campus orientation and a variety of other things a new student will need. But the care being offered goes well beyond filling out forms and finding their way to class, including assistance in dealing with the culture shock so common to those living in a new country.

“Over the years we’ve found that student response, and time frame, to their new life varies,” says Flanagan.

“We look at the whole student here, and do our best to meet each one where they’re at,” she says, adding many international students come to her for help in November. “Generally, that’s about when the anxiety hits – mid-terms are over, homesickness really sets in, and the longer term adjustments begin.”

Students are encouraged to seek out other international students, visit the spiritual centre to practice their religious beliefs and attend alcohol-free events. Students are also advised to contact loved ones at home, which the IPS helps them with.

“It’s really exciting to see all of these students coming in and raring to go,” he says, adding the impact of a new country and culture takes a few days to realize.

When asked if he could offer one piece of advice to new students it would be to “always say ‘Hi’ to the person sitting next to you in your first class.”

Prabowo pointed out all of the students in the class are new to campus, so there is a common bond already being shared.