Annual Salmon Feast teaches the history of the valley 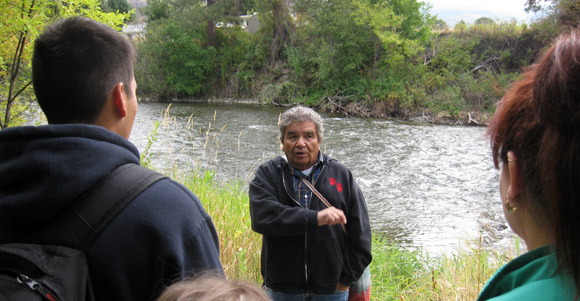 After compiling participant feedback from the event 12 months ago, organizers of this year’s cultural tour to the Okanagan Nation Alliance Salmon Feast added respected elder Richard Armstrong onto the itinerary.

The Okanagan Nation member graciously gave an orientation on the banks of the Okanogan River to both Aboriginal and international UBC students. He talked about how the true name of the indigenous people in this area was not Okanagan.

“When the Indian agents came they asked ‘what are you?’ When asked ‘what are you?’ is different than being asked ‘who are you?’ The people living here replied ‘Okanagan,’ which means ‘people from the bottom of the Valley.’ We are really ‘Syilix People,” said Armstrong who instructs the Okanagan Language course in the Fipke building.

“If I was telling you this prior to 1953, I would go to jail. But we are not afraid to talk about who we are anymore,” he added. 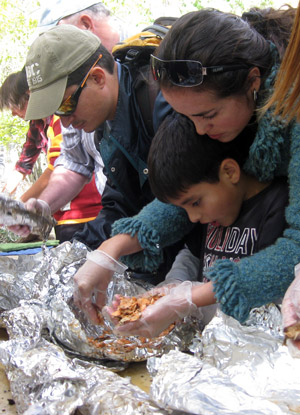 International student Claudia Donoso, from Ecuador, helps her son Nacho take part in the fish deboning work next to the underground cooking pit.

For long-time friends Hernan Moreano and Claudia Donoso,  both graduate students from Ecuador, spending time with Armstrong at the beginning of their cultural tour helped put the whole day into perspective.

“We are living in B.C. but we don’t have the chance to meet First Nations everyday. I liked what the Elder said about how we have different world views and different ways of believing,” said Donoso who brought along her two sons on the tour. “It was nice to share food with the community. We tend not to get together (for food) in society.”

Armstrong talked about the Okanagan Nation Salmon Feast and the cultural traditions surrounding the event. Later, Moreano was extremely attentive during the cleansing ceremony down at the river bank.

“I like the experience with the First Nation people. I also liked the point about the cycle of life. It was very interesting,” said the Ecuador student. “There is a connection between Indigenous people in North America, Central America and South America.”

Prior to the meal being served, many of the students volunteered in deboning the salmon. Once the meal was completed, any smaller bones left on plates were collected and then respectfully returned to the river.

“I saw the poster at school and thought this would be a good experience,” said Roxanne Pham of Calgary on the bus ride home. “I didn’t think there would be as much going on as there was. It was a lot of fun.”

To find out more about the annual Salmon Feast, contact Dan Odenbach, Aboriginal Program Administrator, at 250-807-9376.