Author gives Kelowna audience tips on how to live longer 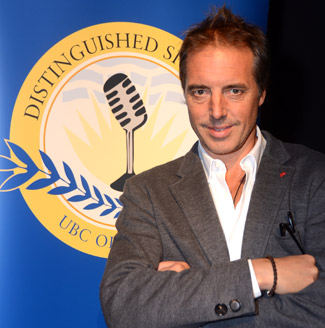 National Geographic journalist and author Dan Buettner was in Kelowna as part of the Distinguished Speaker Series, sponsored by UBC's Okanagan campus. Buettner spoke at the RCA about Blue Zones where people live long, healthier lives.

In all of his travels, Dan Buettner has not located the fountain of youth, but he has picked up a few tips on how to live longer.

The author and National Geographic writer has been from one end of the planet to the other, and along the way he uncovered the best strategies for longevity.

Buettner has identified Blue Zones, where many people live to be 100 or older, and he brought those aging secrets to Kelowna Thursday as part of the University of British Columbia’s Okanagan campus Distinguished Speaker Series.

“There is no silver bullet to living longer. The secret to adding more years has nothing to do with pills, or supplements or diets,” says Buettner.

Buettner spent three years searching the world and found five Blue Zones where people live longer and have fewer ailments. In all of the zones, several common factors became apparent  including a plant-based diet, some form of religious belief, a sense of purpose and being physically active their entire lives, including well into the senior years.

“When you watch TV, your metabolism is actually lower than when you are sleeping,” he says, adding 60 per cent of the people in North America are either overweight or obese, both of which will reduce life expectancy.

Buettner’s National Geographic cover story on longevity, The Secrets of Living Longer was one of their top-selling issues in history and a made him a finalist for the prestigious National Magazine Award.

His books The Blue Zones:  Lessons for Living Longer from the People Who’ve Lived the Longest   and Thrive: Finding Happiness the Blue Zones Way appeared on many best-seller lists and were both featured on Oprah.

In 2009, Buettner and the American Association of Retired Persons (better known as the AARP) applied principles of The Blue Zones to the community of Albert Lea, Minn. and successfully raised life expectancy and lowered health-care costs by some 40 per cent.

Buettner is working on a similar program for the Beach Cities of Los Angeles, where the strategy focuses on optimizing the health environment instead of individual behaviour change.