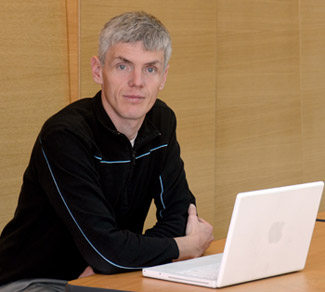 Wolfgang Depner has studied immigrant issues in the South Okanagan and found there are challenges to keeping immigrants in the region.

By resolving many of the issues around retaining immigrants, rural municipalities will also be better able to keep young people in the community.

Wolfgang Depner, a UBC PhD candidate in interdisciplinary studies, has studied the issues faced by immigrants in the South Okanagan, and discovered many of the challenges immigrants must deal with overlap the challenges young people face.

“If young people can’t establish themselves in their community, why should we expect immigrants to come here?” says Depner, adding the challenge is largely because of, but not limited to, economics.

If there is no work, there is no reason for immigrants to come to the region, or for young people in the community to stay.

The high cost of housing and low-paying jobs are also detrimental to retaining both demographic groups.

But Depner found immigrants face even more challenges such as physical access to services. He said the “near absence of an effective public transportation system compounds the physical distances that often separate immigrants” from the services they need.

Along with a better transit system, Depner recommends more services for immigrants, initiatives to make them feel welcome and better educational opportunities.

“Education facilities can keep, and attract, young people,” he says. However, the high cost of housing is possibly the largest barrier for immigrants who are often performing seasonal work.

Depner worked with Carlos Teixeira, associate professor of geography in UBC’s Irving K. Barber School of Arts and Sciences, who has extensively studied immigrant populations in Central and South Okanagan communities. Depner said much of what he found in the South Okanagan mirrors similar challenges in the central region and he used some of Teixeira’s work in his report.

Summerland lost 2.2 per cent of its population in 2010, the largest decline in the province.

Depner said in Penticton 25.7 per cent of the population is comprised of seniors, with that number jumping to 37 per cent in Osoyoos.