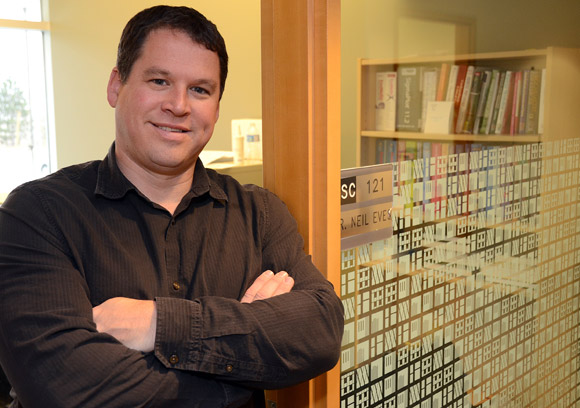 Neil Eves will spend the next several years looking at how exercise affects chronic obstructive pulmonary disease. The exercise physiologist assistant professor at the University of British Columbia’s Okanagan campus has received a long-term grant from the Michael Smith Foundation for Health Research.

Ground-breaking research with world-wide implications and the potential to improve the lives of millions of people with chronic obstructive pulmonary disease (COPD) will begin in the Okanagan in the New Year.

Neil Eves has been awarded a substantial grant from the Michael Smith Foundation for Health Research to study how exercise impacts COPD. Eves will receive up to $635,000 over the next eight years to allow him to examine this important line of inquiry.

The assistant professor, an exercise physiologist with the School of Health and Exercise Sciences at the University of British Columbia’s Okanagan campus, says the research program is highly novel and he plans to begin the long-term project in January.

“It’s answering a lot of questions others have not looked at yet,” says Eves. “We have no idea if exercise has any effect on modifying the primary causes of the disease.”

COPD is an inflammatory disease characterized by progressive limitation to airflow out of the lungs. As the disease progresses, patients suffer from increased shortness of breath to the point where they struggle to breathe even while at rest. Smoking is the primary cause of COPD, but Eves said it can be triggered by any particulate matter that is frequently breathed in, damaging the lungs.

“This is just the start. There are lots of questions that need to be answered,” says Eves. “The key is to try and utilize exercise to reduce airway and blood inflammation and slow down the progression of the disease and a number of its co-morbidities like heart disease and stroke. If we can do that, we will have a massive effect on the health of these individuals. Our aim is to help people live a healthy life even with a chronic disease.”

Each year, COPD is estimated to cost Canadians $4.1 billion in direct and indirect costs, but in the long run, Eves’ work could help reduce that cost, easing some financial pressure on the health care system while improving the lives of those struggling with the disease.

Almost 10 per cent of the Canadian adult population over age 40 has COPD, but Eves says “most people don’t know they have it” as the early stages of the disease might not be recognized, so the numbers may be a lot higher.

As the population ages and baby boomers reach the senior years, the number of COPD cases will continue to rise and by 2020 it will be the third-biggest killer in the world.

Eves will conduct his study on campus and at Kelowna General Hospital in conjunction with colleagues in respiratory medicine. If the study produces the results he is hoping for — that exercise reduces airway and blood inflammation in COPD — Eves says the door will be open to numerous additional studies.