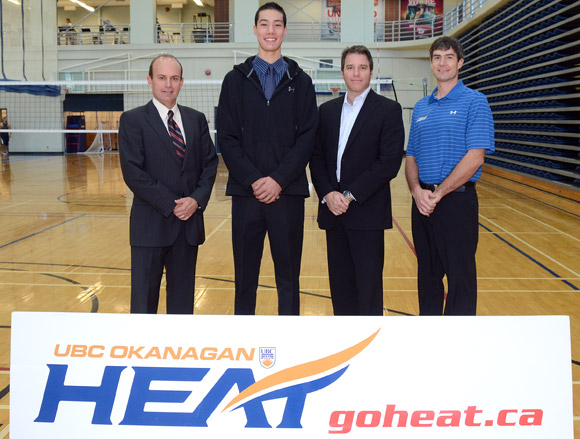 The first-year engineering student at UBC’s Okanagan campus was recently awarded the $2,500 scholarship, renewable for four years, that is funded by an endowment established by Capri Insurance in 2009 to help top scholars, who are also top athletes, attend UBC’s Okanagan campus.

Asselstine, a 6’8” 195-pound forward out of Dr. Charles Best Secondary in Coquitlam, will add some height to the Heat men’s basketball team for its inaugural season in CIS play.  Asselstine is the prototype of the kind of student athlete former CIS basketball player and current Heat head coach Darren Semeniuk is looking for – strong on both the court and in the classroom.

Asselstine’s decision to attend UBC came down to two key decisions: the ability to study engineering and the ability to play basketball at the highest possible level in Canada. Because of this award Asselstine will be able to do both.

“It’s an honor to be chosen for a scholarship such as this because I feel supported to continue focusing on my studies as well as continue playing a varsity sport,” says Asselstine. “The feeling of being supported definitely helps me when I think about trying to achieve my goals of a degree in engineering while playing University basketball,” says Asselstine, which is why “UBC’s Okanagan campus was such a good fit for me.”

“At Capri Insurance we were delighted to establish this scholarship to support UBC’s Okanagan campus, student athletes and indirectly the communities in which we live, work and play,” says Tim Miller, CFO Capri Insurance.

“The applicants for this scholarship are expected to exemplify a great work ethic, dedication and leadership. We congratulate UBC on their selection of Julian as this year’s recipient. The purpose of the scholarship is to help UBC Okanagan create a world class and competitive program by attracting and retaining the very best student athletes.

“UBC is very important to the wellbeing of our community and hopefully these young people will be outstanding future citizens or great ambassadors throughout the world.”

Semeniuk understands the time commitment student athletes make. Playing for a varsity program and keeping up with their studies leaves no room for part-time work.

“It is great to know that the community values athletics and the student athlete enough to provide this level of support. I would really like to thank Capri Insurance for their scholarship endowment. This scholarship ensures Julian will be able to concentrate on his studies and fulfil his desire to play basketball,” says Semeniuk. “Julian is a great kid, a great recruit and the more I get to know and coach Julian it becomes apparent how deserving a candidate he is. He shows great promise on the court and he is continuing his success in the classroom.”

Asselstine may not be headed to the NBA, but he will put his UBC education to use and is already looking to the future.

“I know I won’t be able to play basketball forever, and I want to have a good education to be able to fall back on. As a student athlete it means a lot to receive a scholarship such as this,” says Asselstine.

The previous award winners, Ashley Briker and Chandler Proch, are enjoying success in their athletic careers with the Heat. Proch is in her second year and the starting setter on the women’s volleyball team, while Briker is in her third year and is the starting point guard for the women’s basketball team.