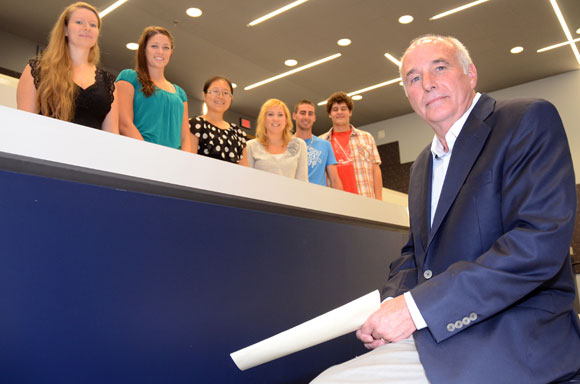 Dr. Allan Jones, regional associate dean, Interior, with some of the medical students who will be attending the program at the Okanagan campus in January. They are, from left: Ashley Shaw, Chase; Robyn Buna, Kelowna; Ellen Cai, Penticton; Christabelle Bitgood, Kelowna; Brennan Arduini, Kamloops; and Daniel Manders, Summerland.

The Southern Medical Program’s (SMP) inaugural class of 32 students has arrived at UBC’s Okanagan campus. As part of UBC Faculty of Medicine’s distributed MD (medical doctor) Undergraduate Program, SMP students spend the balance of the four-year MD program studying and training in communities throughout the BC Interior (having spent their first term in classes in Vancouver).

“The arrival of our inaugural class is a momentous occasion,” says Dr. Allan Jones, Regional Associate Dean, Interior. “A remarkable amount of work and collaboration has taken place to launch the SMP and expand the reach of the MD Undergraduate Program to all areas of the province. Ultimately, our program will help lay the groundwork for increasing the number of practicing physicians in communities throughout the BC Interior.”

SMP students will divide their study and classroom time between the new Health Sciences Centre at UBC’s Okanagan campus for academic courses and the Clinical Academic Campus (next to Kelowna General Hospital) for clinical skills training, such as taking a patient’s medical history, conducting a physical exam, and effective communications skills. Volunteer patients and patient actors are frequently used to simulate realistic training experiences.

Students also work with real patients at family practice offices in Kelowna, West Kelowna, Vernon, and Winfield during weekly mentoring sessions. Patients who participate play a key role in training future physicians by exposing students to the diversity and rewards of family practice.

In their third and fourth years, students begin their clinical training in a variety of rotations such as surgery, emergency medicine, and rural family medicine. The SMP’s clinical training is delivered at KGH, Royal Inland Hospital in Kamloops, Vernon Jubilee Hospital, Kootenay Boundary Regional Hospital in Trail, and other hospitals and health centres in 22 BC Interior communities.

Graduates of the MD Undergraduate Program must then complete residency training to become fully-licensed physicians. This training, ranging between two to seven years depending on the speciality, is completed with either UBC or other medical education institutions across Canada, North America, and abroad.

The UBC Faculty of Medicine offers undergraduate medical education in four regions across BC. The Southern Medical Program – launched in September 2011 – is based at UBC’s Okanagan campus and delivered in collaboration with clinical teaching sites throughout the Interior Health region. For more information, visit www.smp.med.ubc.ca.