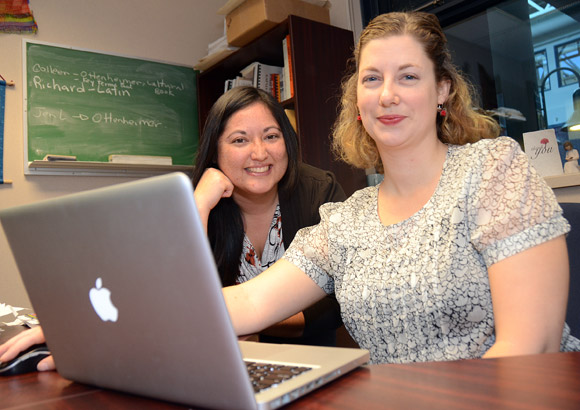 Their goal is to preserve disappearing languages and they are using modern communication methods to do it.

A group of students at the University of British Columbia’s Okanagan campus is delving into almost-lost languages and blogging about them in an effort to keep them alive for future generations.

Among the courses Assistant Professor of Anthropology Christine Schreyer teaches is endangered languages, and several of her students have taken to the Internet to talk about and raise awareness of tongues that are disappearing.

Schreyer says there are approximately 80 indigenous languages in Canada, of which only three are expected to survive: Cree, Inuit (Inuktitut) and Ojibwa. That is mainly due to these three each having more than 20,000 speakers and many children in their respective communities continue learning these as their first languages. But even these could be silenced as English or French take over in the communities where they are spoken.

“It’s very much tied to identity. So when people lose their language, they lose piece of identity, a piece of their culture,” she says, adding these endangered languages are a significant part of Canada’s history and heritage.

“There are 6,000 to 7,000 languages in the world and 90 per cent of them are endangered,” says Schreyer. “Languages of colonizers have taken over. It is usually the indigenous and minority languages that are being lost.”

French and Spanish major Jace Ma studied the language of Guernesiais, spoken on a small island off the coast of Great Britain, finding only two per cent of the population speaks their native language. At the turn of the 20th century, it was the only language spoken on the isle which now is dominated by English. However, during her work Ma found a shift by the island inhabitants to reclaim the unique aspect of their culture.

“There is a really strong cultural identity between people and language,” says Ma. “Over the past 10 years or so, more people have been interested in learning the language. They want to get back to their roots. They want their own culture.”

Such movement to reclaim their linguistic heritage is not uncommon as people, including those in many Canadian First Nations, try to keep their ancestral language alive in some capacity.

Ma continues to blog about the island people and has gone from being an outsider – when she started the project – to bonding with the community through their almost-lost language.

“I have a strong connection with them. I can’t stop blogging about them,” she says.

For more information on the program, go to http://www.christineschreyer.ca